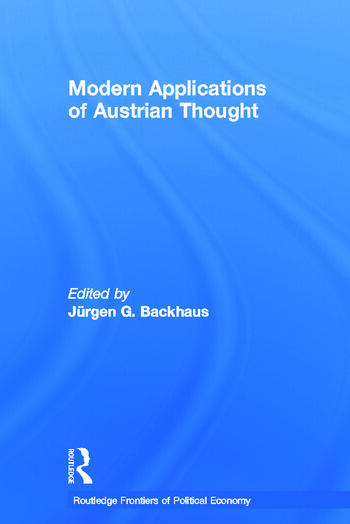 Austrian economics is often criticized as being hostile to empirical research and seen purely as an ideology. In contrast, the purpose of this book is to show that Austrian economics provides an interesting approach to most conceivable subjects in economics. Edited by Jürgen G. Backhaus, this comprehensive volume includes Austrian analysis of:

Contributors include Roger Koppl, Bart Nooteboom, Larry Moss, Dick Wagner and Gerrit Meijer, and this significant book will prove invaluable to students of economics and will make interesting reading for applied economists in any area of application.

Introduction  1. The Applied Economics of the Modern Austrian School  2. F.A. Hayek’s Methodological U-Turn Reconsidered in Light of his Concept of Social Facts  3. The Consumer in Austrian Economics and the Austrian Perspective on Consumer Policy  4. Austrian Cycle Theory and the Prospect of a Coordinationist Macroeconomics  5. Big Players and Money Demand: The case of the demand for money  6. Taxation: An Austrian approach  7. Some Aspects of the Relationship between the Freiburg School and the Austrian School  8. A Model of the Dynamic Welfare State - Friedrich von Hayek Revisited  9. Austrian Aspects to Health Economics  10. Austrian Theory in the Area of Labor Economics  11. Neo-Austrian, Industrial and Ordo-Austrian Competition Policy  12. Discovery, Competence and Services  13. Werner Sombart's Views on Profit, Capital, Credit and the Austrian School of Economics  14. Austrian Economics and ‘The Other Canon’: The Austrians between the activistic-idealistic and the passivistic-materialistic traditions of economics  15. The Property Rights Basis of vond Mises’ Critique of Socialism and the Privatisation in Eastern Europe  16. Comparative Economic Systems  17. Property Rights and Environmental Protection in Austrian and Neo-Austrian Theory

Jürgen G. Backhaus holds the Krupp Foundation Chair of Public Finance and Fiscal Sociology at the University of Erfurt in Germany. He is also the founding editor of the European Journal of Law and Economics.