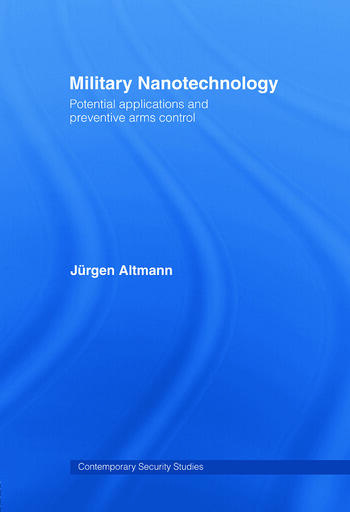 With revolutionary changes in nanotechnology (NT) now on the horizon, many countries have started major research and development (R&D) programmes, which are mainly civilian. Often overlooked are military R&D programmes – in particular those of the US government. This is the first systematic and comprehensive presentation of the potential military applications of NT.

In ten to twenty years, these applications may include extremely small computers, robots, missiles, satellites, launchers and sensors. They may also provide lighter and stronger materials for vehicles and weapons, implants in soldiers’ bodies, metal-free firearms, autonomous fighting systems, and smaller chemical and biological weapons.

These potential uses raise strong concerns. This assessment is made from a viewpoint of international security, considering the new criteria of dangers for arms control and the international law of warfare, dangers for stability through potential new arms races and proliferation, and dangers for humans and society. Some military applications, such as computers, will be so close to civilian uses that limits are impractical. Others, such as sensors for biological-warfare agents, may contribute to stronger protection against terrorist attacks and better verification of compliance with arms-control treaties.

For preventive limitation of these new technologies, specific approaches are proposed that balance positive civilian uses and take into account verification of compliance, with a view to international peace and security, not national military strength.

This book will be of great interest to scholars of military technology, non-lethal weapons, disarmament and security studies in general.