Mediating the Message in the 21st Century
A Media Sociology Perspective 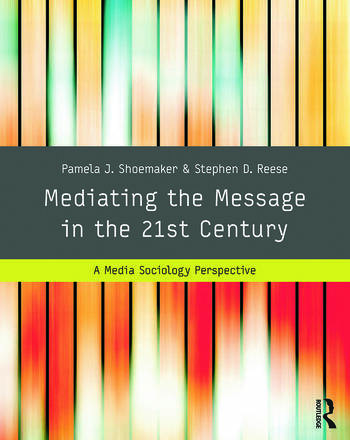 Mediating the Message in the 21st Century: A Media Sociology Perspective

Hailed as one of the "most significant books of the twentieth century" by Journalism and Mass Communication Quarterly, Mediating the Message has long been an essential text for media effects scholars and students of media sociology. This new edition of the classic media sociology textbook now offers students a comprehensive, theoretical approach to media content in the twenty-first century, with an added focus on entertainment media and the Internet.

Pamela J. Shoemaker has been John Ben Snow Professor in the S.I. Newhouse School of Public Communications at Syracuse University, New York, since 1994. Her books include Gatekeeping Theory with Tim Vos (2009), Gatekeeping (English with Mandarin annotations) with Yonghua Zhang (2007), News Around the World with Akiba Cohen (2006), How to Build Social Science Theories with James Tankard and Dominic Lasorsa (2004), Mediating the Message with Stephen Reese (1996, 1991), Gatekeeping (1991), and an edited volume Communication Campaigns About Drugs (1989). In addition, Shoemaker and Michael Roloff have edited a top-ranked journal Communication Research since 1997. She has been invited to speak in Brazil, Canada, China (10 universities), Germany, Israel, Mexico, Peru, Portugal, Russia, South Africa, and the United Kingdom and has given conference papers in many others. She is a past president of the Association for Education in Journalism and Mass Communication and formerly a head of its communication theory and methodology division; she is also a former chair of the mass communication division of the International Communication Association. Prior to joining the Newhouse School, Shoemaker was director of the School of Journalism at Ohio State University (1991-1994) and was on the faculty at the University of Texas at Austin (1982-1991). Her Ph.D. in mass communications is from the University of Wisconsin at Madison (1982), with her M.S. in communication and B.S. in journalism from Ohio University, Athens (1972).

is Jesse H. Jones Professor and Associate Dean for Academic Affairs in the College of Communication at the University of Texas at Austin, where he has been on the faculty since 1982 and was previously director of the School of Journalism. His research on issue framing, media sociology, political communication, and the globalization of journalism has been published in numerous book chapters and articles, and includes his edited volume, Framing Public Life: Perspectives on Media and our Understanding of the Social World (2001), Mediating the Message: Theories of Influence on Mass Media Content with Pam Shoemaker (1996, 1991), and major edited section, "Media Production and Content," in the International Communication Association’s Encyclopedia of Communication (2008). He has chaired the Political Communication Division of the International Communication Association and two divisions of the Association for Education in Journalism and Mass Communication, and was awarded that organization’s Krieghbaum Under-40 award for teaching, research, and service. He has lectured internationally at universities in Brazil, China, Colombia, Finland, Germany, Israel, Mexico, and Spain, and was Kurt Baschwitz Visiting Professor at the University of Amsterdam. He received his Ph.D. from the University of Wisconsin (1982) and his B.S. in communication from the University of Tennessee (1976).

"The eagerly-awaited Mediating the Message in the 21st Century consolidates the growing literature on the forces shaping media content and representation of reality, offering an updated hierarchical model that ranges from ideological to individual levels of analysis, and that works with traditional and ‘new’ communication professions alike, energizing our thinking and guiding us as students and scholars to the critical questions that need asking next." —Daniel Riffe, Richard Cole Eminent Professor, School of Journalism and Mass Communication, University of North Carolina at Chapel Hill

"Shoemaker and Reese detail the conceptual background needed to tell the full story of media’s influence on society, ranging from dominant social systems to journalistic practices—forces that both shape the messages experienced by an audience and set the context for their response. Mediating the Message in the 21st Century points the way to an expanded and unified perspective on public communication." —Maxwell McCombs, School of Journalism, University of Texas at Austin

"This massive update of the notable original serves as a major and sophisticated inquiry into the complexity of a most elusive subject—what indeed influences the content of our media messages? Shoemaker and Reese’s answer provides a significant scholarly contribution towards understanding the fast-paced, information-driven 21st century we live in." —Betty Houchin Winfield, School of Journalism, University of Missouri

"The long-awaited 3rd edition of the Shoemaker and Reese classic delivers a broadened sense of context and form, reflecting a radically shifting media climate. Their Hierarchy of Influences Model thoughtfully guides readers toward systematic theoretical thinking about the creation of media content." —Dan Berkowitz, School of Journalism and Mass Communication, University of Iowa