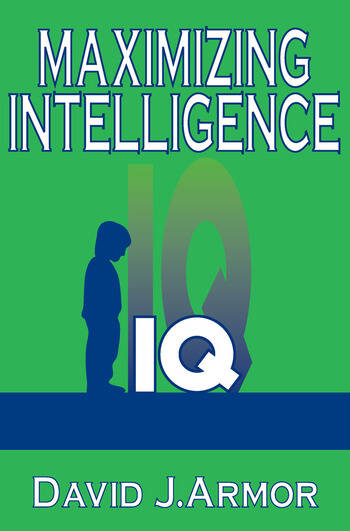 The "nature versus nurture" controversy dates back to at least the nineteenth century. How much of a role does genetics or environment play in accounting for reasoning skill and other intellectual aptitudes? At a time when the public school system in the United States is under attack, this debate has taken center stage in arguments about what accounts for differences in academic achievement. Maximizing Intelligence convincingly argues that, while both genetics and environment play a role in a child's intelligence, environmental factors, especially at an early age, are of primary importance. Working from this premise, Armor suggests how intelligence may be heightened.

Armor presents four propositions about intelligence. His first is that intelligence exerts a major influence on educational and occupational success, following a chronological sequence, from a child's cognitive skills learned before school, to academic success during the school years, to eligibility for college. His second proposition is that intelligence can be changed, at least within limits. There is ample evidence that a child's intelligence is not fully given at birth, but continues to evolve and change at least through the early elementary school years, although at a declining rate.

Proposition three is that intelligence is influenced by a series of "risk factors," and most of the influence occurs before a child reaches school age. Risk factors include parent intelligence and education, family income, family structure and size, nutrition, and specific parenting behaviors. The fourth proposition flows from the second and third--that the most promising avenues for maximizing intelligence come from a child's parents. Armor persuasively argues for a "whole family" approach whereby government programs are modified or created to inform parents of risk factors and to reward behaviors that optimize positive outcomes.

Maximizing Intelligence is meticulously researched and reasoned, and will be welcomed by those interested in education, sociology, psychology, social theory, and policy studies.