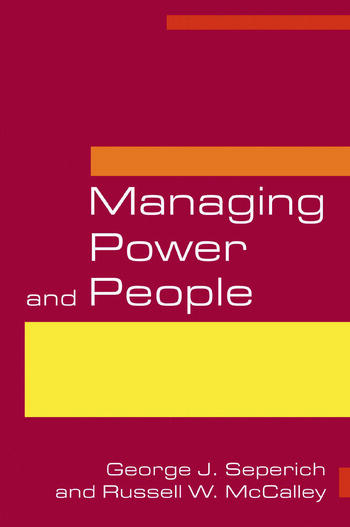 This practical text offers management students as well as professionals a comprehensive guide to an essential management function: the use of power and authority to achieve specific objectives. Incorporating numerous case studies and examples of actual management experiences in both large and small companies, the book provides an effective approach to the use of power to manage people and projects successfully without fear of conflict. The work is based on a unique blending of management and leadership, combined to create a powerful influence on employees resulting in the "managed responses" required to reach the planned objective. Building on this principle, the authors demonstrate how managers can use the different types of power effectively in a wide variety of situations. They show how to make use of an organization's established power structure, and offer step-by-step guidance on the essential concept of FOCUS Management. Including learning objectives, case studies, and discussion questions, this text prepares students to apply what is learned directly to any working environment. An online Instructor's Manual is available for instructors who adopt the book.

Not only are Hispanics the largest minority group in the United States, but Mexico is fast becoming our major trading partner, surpassing even Japan. In fact, the U.S. now has the fourth largest Spanish-speaking population in the world, after Mexico, Spain, and Argentina. How has this demographic group transformed the U.S. into a bi-lingual nation within the span of a generation? Why do Hispanics resist assimilation and insist on speaking Spanish in public life? And how can businesses effectively reach the emerging Hispanic consumer market with its estimated puchasing power of USD1 trillion by 2010? These questions constitute the single-most important marketing challenge for corporate America in the twenty-first century. This book examines the Hispanic worldview and how it informs people's economic decisions, both in the United States and across North America. It challenges the viewpoint that American culture will soon dominate its NAFTA trading partners, looks carefully at the market for Hispanic goods in the U.S. and the market for our goods throughout the Spanish-speaking world, and shows how marketeers are now reaching the Hispanic community domestically.