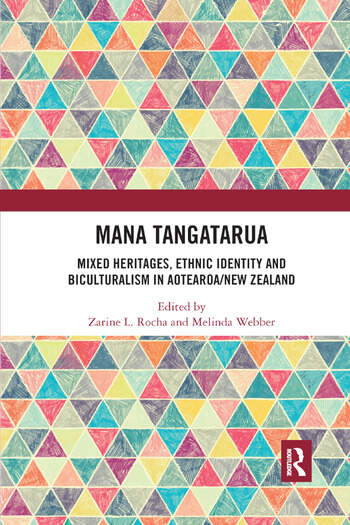 The book draws upon research across a range of disciplines, exploring the historical and contemporary ways in which official and social understandings of mixed race and ethnicity have changed. It focuses on the interactions between race, ethnicity, national identity, indigeneity and culture, especially in terms of visibility and self-defined identity in the New Zealand context.

Mana Tangatarua situates New Zealand in the existing international scholarship, positioning experiences from New Zealand within theoretical understandings of mixedness. The chapters develop wider theories of mixed race and mixed ethnic identity, at macro and micro levels, looking at the interconnections between the two. The volume as a whole reveals the diverse ways in which mixed race is experienced and understood, providing a key contribution to the theory and development of mixed race globally.

Section one: Mixedness and classifications across generations

Chapter One: A history of mixed race in Aotearoa/New Zealand. Zarine L. Rocha and Angela Wanhalla

Chapter Eight: Māori and Pākehā encounters of difference – the realisation that we’re not the same. Karyn Paringatai

Dr Zarine L. Rocha, is the Managing Editor of Current Sociology and the Asian Journal of Social Science.

Dr Melinda Webber is an Associate Professor in the Faculty of Education and Social Work at the University of Auckland.