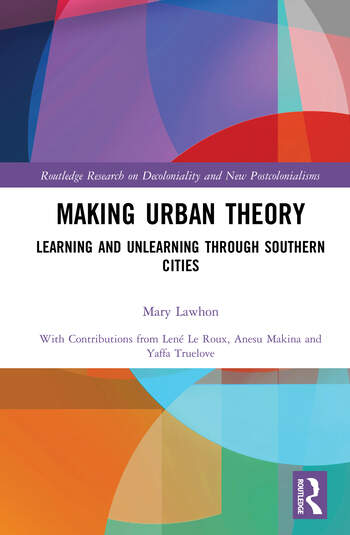 This book facilitates more careful engagement with the production, politics and geography of knowledge as scholars create space for the inclusion of southern cities in urban theory.

addresses debates of the past fifty years regarding whether and why scholars should conceptualize southern cities as different and argues for the continued importance of unlearning existing theory. With examples from the urban question to environmental justice, urban infrastructure to basic income, this volume highlights the limitations of existing explanations as well as how thinking from the south entails more than collecting data in new places. Throughout the book, instances of juxtapositions, unease, unlearning and learning anew emphasize how theory-making from southern cases can open avenues to more creative possibilities. The book pulls theories apart, examining distinct components to better understand the universality and provinciality of empirical phenomena, causality and norms, including questions of what a city is and ought to be.

This book delivers a clearer articulation of ongoing debates and future possibilities for southern urban scholarship, and it will thus be relevant for both scholars and students of Urban Studies, Urban Theory, Urban Geography, Research Methods in Geography, Postcolonial/Southern Cities and Global Cities at graduate and post-graduate levels.

1 Postcolonialism and urban studies: shifting the gaze from the city to the academy

3 Provincializing the urban question: against the rural-in-the-urban

4 The struggle for the city, and for the right to be city

7 Unbundling urban theory: of what is theory made?

9 Recognizing and reworking the norms that travel with theory

Mary Lawhon is Assistant Professor in the Department of Geography and Environmental Sustainability, University of Oklahoma, USA. Her research interests include urban theory, postcolonial studies, urban political ecology and the politics of urban infrastructure.

Lené Le Roux is a doctoral candidate in the Department of Geography and Environmental Sustainability, University of Oklahoma, USA. Trained as an urban planner, her research interests include southern urban theory, place and place-claiming, critical pedagogy and South African cities.

is a doctoral candidate in the Department of Geography and Environmental Sustainability, University of Oklahoma, USA. She previously worked as an environmental researcher at the University of Pretoria, South Africa. Her research interests include African cities, urban informality and political ecology.

is Assistant Professor in the Department of Geography, University of Colorado-Boulder, USA. Her research primarily examines the connections between urban waterscapes and socio-political processes in cities of the global south, including differing regimes and institutions of everyday urban governance.