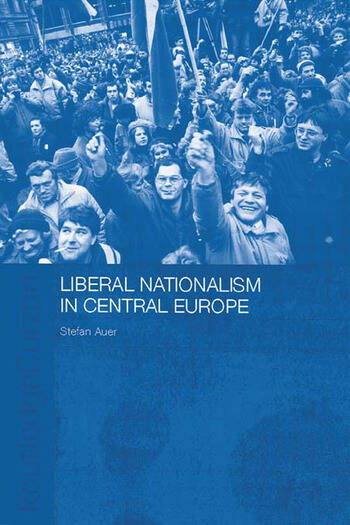 After the collapse of communism there was a widespread fear that nationalism would pose a serious threat to the development of liberal democracy in the countries of central Europe. This book examines the role of nationalism in post-communist development in central Europe, focusing in particular on Poland, the Czech Republic and Slovakia. It argues that a certain type of nationalism, that is liberal nationalism, has positively influenced the process of postcommunist transition towards the emerging liberal democratic order.

Stefan Auer is a lecturer in European politics and societies at the Dublin European Institute, University College Dublin. Prior to this, he studied at the University of Melbourne, and at Universities in Slovakia and Germany. His research interests include the challenges of postcommunist transition and aspects of political theory.

'A fine and useful book; his thesis, that nationalism, when liberal, isn't a threat to democracy or minorities, and actually helps the nation building, is an important counter to the blanket condemnations of nationalism by other writers.' - Professor Andrew Oldenquist, Ohio State University

'The book by Stefan Auer belongs to the very rare kind in the studies of East Central Europe. It is based on first-hand knowledge of the problems of postcommunist societies and shows deep understanding of the intellectual and political debates, which have been going on in East Central Europe since 1989. It makes many very important points that could contribute to revision of some widespread simplistic convictions about nationalism in that region. Anyone who is interested in East Central Europe and in the problems of nationalisms, studied without prejudices and ideological bias, should read this book.' - Professor Zdzislaw Krasnodebski, Universitat Berlin

'Awarded the 2005 UACES Book Prize for having made "the most substantial and original contribution to the knowledge in the area of European Studies."- University Association for Contemporary European Studies, UK

'I can certainly recommend this book as being informative in content, novel in approach, and extremely useful as a reference for nationalism scholars.' - Slavic Review

'There is much to applaud [in this book]. Stefan Auer demonstrates a deep understanding of the complexity of politics in his three cases.' - Nations and Nationalism

'It convincingly repudiates the traditional and popular views on nationalism in Central Europe...[The book] is a well researched and intellectually stimulating book that is to be valued for its qualities as an eye-opener. Auer deserves praise for making us aware of the fact that there is at least a possiblity that liberal nationalism may further democratic consolidation.' - Europe-Asia Studies

'This book brings an important nuance in the thinking about nationalism in central Europe...[It] provides an excellent basis for further innovative research in promoting the thesis that nationalism, when liberal, is not a threat to democracy or minorities, but helps nation building.' - West European Politics