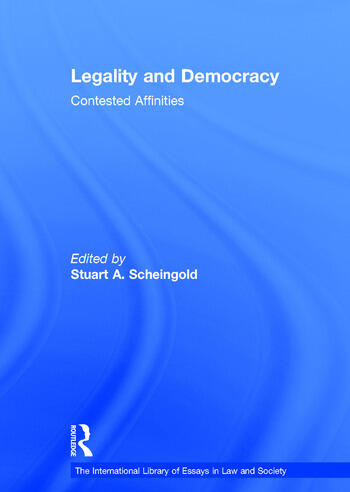 Democracy and the rule of law are commonly represented as complementary and indispensable components of the modern democratic state. Whatever the truth of this formulation, it conceals the competing claims of electoral and legal accountability that are the subject of this volume. Political, legal and social theorists have long debated these contending claims. Recent socio-legal scholarship has shed empirical light on the debate. Accordingly, this volume brings together some of the landmarks of the relevant theory, including the work of such scholars as H.L.A. Hart, Lon L. Fuller and Philip Selznick and incorporates current socio-legal scholarship by such leading figures as Malcolm Feeley, Robert Kagan, Michael McCann and David Nelken.

Stuart Scheingold is Professor Emeritus of Political Science at the University of Washington, USA. He edited a previous Ashgate volume: Politics, Crime Control and Culture (1997) and has most recently published books and articles on the politics of rights, on cause lawyers, and on the politics of crime and punishment. He is currently at work on a book about 20th century political novels.

'Scheingold's choice of articles to include in this volume, his imaginative interpretive essay, and the organization of the works included in the volume demonstrate how sociolegal empirical scholarship has and should address broad issues derived from political and legal theory.' -The Law an Politics Book Review, February 2007