Invasive and Introduced Plants and Animals
Human Perceptions, Attitudes and Approaches to Management 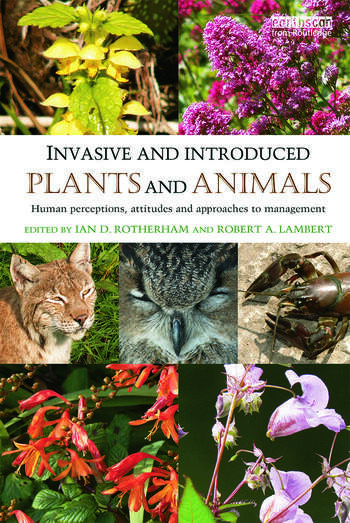 Invasive and Introduced Plants and Animals: Human Perceptions, Attitudes and Approaches to Management

There have been many well-publicized cases of invasive species of plants and animals, often introduced unintentionally but sometimes on purpose, causing widespread ecological havoc. Examples of such alien invasions include pernicious weeds such as Japanese knotweed, an introduced garden ornamental which can grow through concrete, the water hyacinth which has choked tropical waterways, and many introduced animals which have out-competed and displaced local fauna.

This book addresses the broader context of invasive and exotic species, in terms of the perceived threats and environmental concerns which surround alien species and ecological invasions. As a result of unprecedented scales of environmental change, combined with rapid globalisation, the mixing of cultures and diversity, and fears over biosecurity and bioterrorism, the known impacts of particular invasions have been catastrophic. However, as several chapters show, reactions to some exotic species, and the justifications for interventions in certain situations, including biological control by introduced natural enemies, rest uncomfortably with social reactions to ethnic cleansing and persecution perpetrated across the globe. The role of democracy in deciding and determining environmental policy is another emerging issue. In an increasingly multicultural society this raises huge questions of ethics and choice. At the same time, in order to redress major ecological losses, the science of reintroduction of native species has also come to the fore, and is widely accepted by many in nature conservation. However, with questions of where and when, and with what species or even species analogues, reintroductions are acceptable, the topic is hotly debated. Again, it is shown that many decisions are based on values and perceptions rather than objective science. Including a wide range of case studies from around the world, his book raises critical issues to stimulate a much wider debate.

Part 1: Setting the Scene.  1. Balancing Species History, Human Culture and Scientific Insight: Introduction and Overview.  2. Human Interactions with Non-Native Species Part 2: Attitudes and Perceptions.  3. Over Here: American Animals in Britain.  4. How the Concept of Alien Species Emerged and Developed in Twentieth-Century Britain.  5. Nativeness and Nationhood: What Species 'Belong' in Post-devolution Scotland?  6. Who is the Invader? Alien Species, Property Rights, and the Police Power.  7. Whales, Whitefellas and the Ambiguity of 'Nativeness': Reflections on the Emplacement of Australian Identities.  8. The Rise of Modern Invasion Biology and American Attitudes Towards Introduced Species.  9. Anekeitaxonomy: Botany, Place and Belonging.  10. The other Side of Bio-Invasion: The Example of Acclimatization in Germany  Part 3: Case Studies and Case Histories.  11. Strangers in a Familiar Land: The Return of the Native 'Aliens' and the (Re)wilding of Britain's Skies, 1850-2010.  12. Public Perception of Invasive Alien Species in Mediterranean Europe.  13. The Human Dimensions of Invasive Plants in Tropical Africa.  14. Plant Invasions – The Case of Acclimatisation and wild Gardeners.  16. Factors Affecting People's Response to Invasive Species Management.  17. The Paradox of Invasive Species in Ecological Restoration: Do Restorationists Worry about Them Too Much or Too Little?  18. A View from Continental Europe: The Case-study of Prunus Serotina in France in Comparison with other Invasives.  19. Native or Alien? The Case of the Wild Boar in Britain.  20. Exotic and Invasive Species: An Economic Perspective.  21. Satisfaction in a Horse: The Perception and Assimilation of an Exotic Animal into Maori Custom Law.  22. Fire and Loathing in the Fynbos: Notions of Indigenous and alien vegetation in South Africa's Western Cape, c.1902-1945  23. Biological Invasion and Narratives of Environmental History in New Zealand, 1800-2000s.  Part 4: The Way Ahead: Conclusions and Challenges.  24. Good Science, Good History and Pragmatism: Managing the way ahead.  Index

Ian Rotherham is a leading researcher and writer on ecological history with a long-standing interest in exotic and invasive animals and plants. He is a Reader, Director of the Geography, Tourism, and Environment Research Unit, and International Research Co-ordinator at Sheffield Hallam University, UK.

'...a truly momentous, provocative and at times, hilarious analysis of the incredibly complex, controversial and conflict-ridden world of invasive and introduced plants and animals. In bridging the gap between objective science and subjective sociocultural fashions and values, this compelling tome dares to go 'where no one has gone before', with its rich and diverse consideration of the multi-faceted issues surrounding species invasions and introductions. Be warned! After devouring this, you'll never look at plants and animals in quite the same way ever again... This is a clarion call - no more excuses.' - Sarah Simons, Executive Director, Global Invasive Species Programme.

'An interesting and much-needed book that tackles an important aspect of invasive alien species: how they are perceived, valued and judged by humans. The volume draws together a broad range of fascinating case studies and is very thought-provoking. A must for any serious invasion ecologist.' - Robert A. Francis, King's College London, and Secretary of the British Ecological Society Invasive Species Special Interest Group.

'For an ecologist it is a salutary experience to examine this excellent record of the widespread confusion and conflict that has surrounded the human response to invasive species. Is this a humiliating testament to the immature and fragmentary state of our subject or should we admit that local, cultural, economic, political and sentimental forces are more important and will often dictate an unpredictable course of action?' - Professor Philip Grime, University of Sheffield, UK.

'Abounding with parallels with the human world, Invasive and Introduced Plants and Animals: Human Perceptions, Attitudes and Approaches to Management is a book to recommend without hesitation.' - Robert Alexander Hearn, University of Genoa, in Environment and History (Vol 19, 2013).

'It takes a fresh approach to invasive species by asking to what extent popular perceptions and attitudes conflict with objective science and examining how this conflict affects outcomes.'- Peter Marren, British Wildlife

'It is gratifying to find the matter so thoroughly dealt with, especially meeting the issues of xenophobia, arbitrary cut off cut-off points in ecological time, and the often ignored fact that in most parts of Britain and Europe at least, one us dealing with a whole landscape shaped by non- native species.' - Peter Taylor, ECOS