Infirmity in Antiquity and the Middle Ages
Social and Cultural Approaches to Health, Weakness and Care 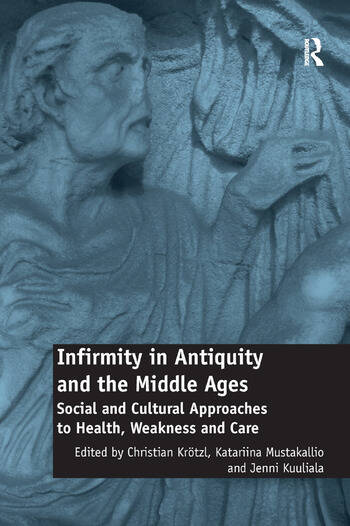 Infirmity in Antiquity and the Middle Ages: Social and Cultural Approaches to Health, Weakness and Care

This volume discusses infirmitas (’infirmity’ or ’weakness’) in ancient and medieval societies. It concentrates on the cultural, social and domestic aspects of physical and mental illness, impairment and health, and also examines frailty as a more abstract, cultural construct. It seeks to widen our understanding of how physical and mental well-being and weakness were understood and constructed in the longue durée from antiquity to the Middle Ages. The chapters are written by experts from a variety of disciplines, including archaeology, art history and philology, and pay particular attention to the differences of experience due to gender, age and social status. The book opens with chapters on the more theoretical aspects of pre-modern infirmity and disability, moving on to discuss different types of mental and cultural infirmities, including those with positive connotations, such as medieval stigmata. The last section of the book discusses infirmity in everyday life from the perspective of healing, medicine and care.

Preface / Introduction: Infirmitas in Antiquity and the Middle Ages, Kuuliala, Mustakallio and Krötzl / Part I Defining Infirmity and Disability: Age, agency and disability: Suetonius and the emperors of the 1st century CE, Harlow and Laurence / Infirmitas or not? Short-statured persons in ancient Greece, Dasen / Performing dis/ability? Constructions of ‘infirmity’ in late medieval and early modern life writing, Frohne / Nobility, community and physical impairment in later medieval canonization processes, Kuuliala / Towards a glossary of depression and psychological distress in ancient Roman culture, Puliga / Part II Societal and Cultural Infirmitas: The crusader's stigmata: true crusading and the wounds of Christ in the crusade ideology of the 13th century, Tamminen / Illness, self-inflicted body pain and supernatural stigmata: three ways of identification with the suffering body of Christ, Klaniczay / Imagery of disease, poison and healing in the late 14th-century polemics against Waldensian heresy, Välimäki / Infirmitas Romana and its cure - Livy’s history therapy in the Ab urbe condita, Mustakallio and Pyy / Part III Infirmity, Healing and Community: From Mithridatium to Potio sancti Pauli: the idea of a medicine from Antiquity to the Middle Ages, Hautala / Alternative medicine in pre-Roman and republican Italy: sacred springs, curative baths and ‘votive religion’, Griffith / Bathing the infirm: water basins in Roman iconography and household contexts, Berg / Sexual incapacity in medieval materia medica, Niiranen / Miracles and the body social: Infirmi in the middle Dutch miracle collection of Our Lady of Amersfoort, Van Mulder / Saints, healing and communities in the later Middle Ages: on roles and perceptions, Krötzl / Bibliography / Index.