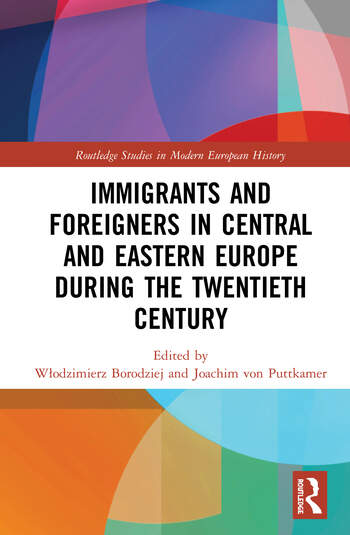 The book brings together a variety of case studies on Poland, Hungary, Czechoslovakia, and Yugoslavia, and the experiences of return migrants from the United States, displaced Hungarian Jews, desperate German social democrats, resettled Magyars, resourceful tourists, labour migrants, and Zionists. In doing so, it highlights and explores the variety of experience across diﬀerent forms of immigration and discusses its broader social and political framework.

Presenting the challenges within the history of immigration in Eastern Europe and considering both immigration to the region and emigration from it, Immigrants and Foreigners in Central and Eastern Europe during the Twentieth Century provides a new perspective on, and contribution to, this ongoing subject of debate.

Chapter 1: Refugees and Migrants: Perceptions and Categorizations of Moving People 1789–1938

Chapter 2: Return Migration and Social Disruption in the Polish Second Republic: A Reassessment of Resettlement Regimes

Chapter 4: ‘In the long run, people will go down here’. Refugees from Nazi Germany in Czechoslovakia in the 1930s

Chapter 6: Passports and Profits: Foreigners on the Trade Routes of the Polish People’s Republic (PPR)

Chapter 7: Socialist Mobility, Postcolonialism and Global Solidarity: The Movement of People from the Global South to Socialist Hungary

Chapter 8: Migration, Gender and Family: A Bottom-Up Perspective on Migration, Return Migration and Nation-building in 1950s Poland and Israel

Chapter 9: East-Central Europe and the Making of the Modern Refugee