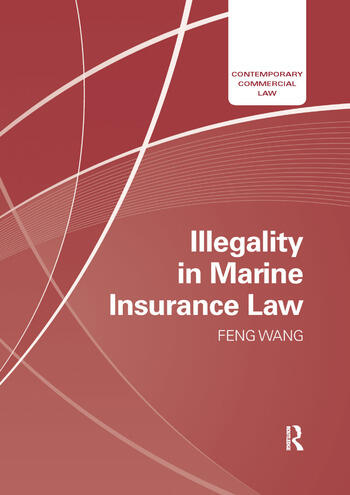 Illegality in Marine Insurance Law is the first book to deal specifically with illegality in the context of marine insurance law. Previously, this issue has only ever been partially covered within analysis and criticism of Section 41 of the Marine Insurance Act 1906 and warranties. However, Dr Wang Feng goes much further than this by considering its impact on the common law relevant to marine insurance in many jurisdictions worldwide.

The book addresses whether the existing law represents an accurate codification of the former authorities and whether Section 41 truly reflects existing legal principles. As well as this, the book examines how correctly to approach illegality within the context of marine insurance, considering the fundamental changes to the rule of breach of warranty  introduced by the Insurance Act 2015.

Part I: The Warranty of Legality in Marine Insurance Law

3. The Illegality Defence in Tort Law and the Ex Turpi Causa Defence in Insurance

4. The Illegality Defence in Contract Law and its Application in Insurance Contracts

5. The Differences between the Illegality Defence in Common Law and the Warranty of Legality in Marine Insurance and the Reasons for the Differences

7. The Marine Insurance Legality Issue in Australia and Other Common Law Jurisdictions

8. Warranty of Legality from the Perspective of Insurance Act 2015

9. A Proposal for the Reform of Section 41

Dr Feng Wang is a Post-Doctoral Fellow at the University of Singapore.