Honourable Intentions?
Violence and Virtue in Australian and Cape Colonies, c 1750 to 1850. 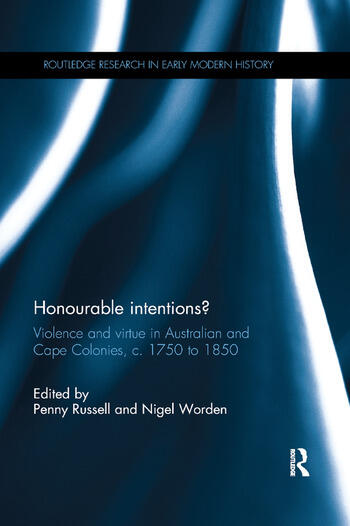 Honourable Intentions?: Violence and Virtue in Australian and Cape Colonies, c 1750 to 1850.

Honourable Intentions? compares the significance and strategic use of ‘honour’ in two colonial societies, the Cape Colony and the early British settlements in Australia, between 1750 and 1850. The mobile populations of emigrants and sojourners, sailors and soldiers, merchants and traders, slaves and convicts who surged into and through these regions are not usually associated with ideas of honour. But in both societies, competing and contradictory notions of honour proved integral to the ways in which colonisers and colonised, free and unfree, defended their status and insisted on their right to be treated with respect. During these times of flux, concepts of honour and status were radically reconstructed.

Each of the thirteen chapters considers honour in a particular sphere - legal, political, religious or personal - and in different contexts determined by the distinctive and changing matrix of race, gender and class, as well as the distinctions of free and unfree status in each colony. Early chapters in the volume show how and why the political, ideological and moral stakes of the concept of honour were particularly important in colonial societies; later chapters look more closely at the social behaviour and the purchase of honour among specific groups. Collectively, the chapters show that there was no clear distinction between political and social life, and that honour crossed between the public and private spheres.

This exciting new collection brings together new and established historians of Australia and South Africa to highlight thought-provoking parallels and contrasts between the Cape and Australian colonies that will be of interest to all scholars of colonial societies and the concept of honour.

Penny Russell is Bicentennial Professor of Australian History at the University of Sydney. Her publications include Savage or Civilised? Manners in colonial Australia (2010) and This Errant Lady: Jane Franklin’s journey to Port Phillip and Sydney, 1839 (2002).

Nigel Worden is King George V Professor of History at the University of Cape Town. His publications include, Cape Town between East and West: Social identity in a Dutch colonial town (2012), The Making of Modern South Africa 5ed. (2011) and Cape Town: The making of a city (1998).