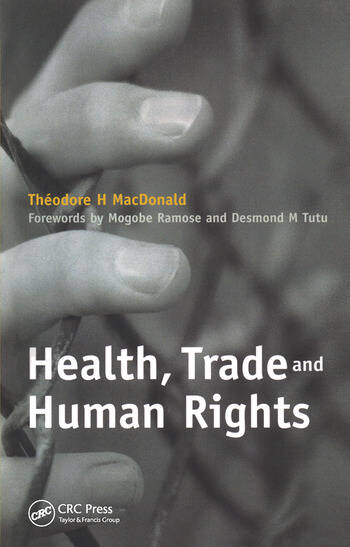 This work contains forewords by Desmond M. Tutu, Archbishop Emeritus, Cape Town, South Africa and Mogobe Ramose, Chairperson and Professor of Philosophy, Department of Philosophy, University of South Africa. "Health, Trade and Human Rights" shows how a policy of 'free' rather than 'fair' trade increasingly undermines Third World health. It clearly illustrates how the looming environmental crisis combined with growing levels of health inequity will have adverse effects and details precisely how the 'basic human rights' enshrined in the UN Charter have gradually become subsidiary to the dictates of free trade, enforced by the World Trade Organisation. This groundbreaking new book argues the need for impartial, data-based, and transnational arbitration of equity in health and other human rights - and suggests how this might be accomplished without violence to national rights, with an emphasis on 'regional free trade'. "Health, Trade and Human Rights" provides vital, thought provoking information for general readers with an interest in the Third World and social welfare. Academics and students studying development, international studies and public health will find it invaluable, as will healthcare professionals, international healthcare organisations, care agencies, and international charities. Policy makers and shapers in communities and government will find the content revelatory as will political activists and those with an interest in equality and globalisation. '[The book] criticises the basis, the method and the extent to which the politics of wealth continues to undermine and violate the right of the poor to good health. The combination of experience with scientific rigour is presented in accessible everyday language. It is seductive; inviting the curiosity of the reader to last until the very end of the book. MacDonald's message is clear and unambiguous: war is no longer the father of all things. Instead, justice is the mother of all peace.' - Mogobe Ramose, in his Foreword. 'Astonishingly accessible, informing and inspiring. Statistically sound, penetratingly. accurate, admirably balanced. Theodore MacDonald writes with passion, as well as with sense. Much of what he has to say is drawn from his own experience working as a medical doctor and a mathematician in a broad range of the world's poorest nations. But overarching that is a powerful insight into social and economic issues, along with well-honed skills as a communicator. I am pleased to recommend this splendid book.' - Desmond M. Tutu, in his Foreword.

What are the problems? The link with imperialism. Whose WHO? Health planning for international trade. The 'brain drain' from third to first world. The health-wealth relationship. The health-wealth problem. Trips - WHO and trips. Global variations in health. Within poor community relations. First world finance - bad for Third World health. Brief conspectus of development. Effect of neoliberalism on primary healthcare. Origins of present trading system. Structural adjustment. Sequence of events behind the debt crisis. Debt, environment and health. Upholding the banks. The need to establish an economic basis for human rights. First the goods, then the people. Impact of emigration on society's health. The environment - our ultimate arbitrator. Environmental unsustainability. Environmental cost of air transport. Can carbon emissions be traded? Water, water everywhere - but not to drink. Growing first world control over water. How about a game of golf? What about climatic change? Consequences of lack of global control. Financial consequences. Big tidal waves and tsunamis. Mothers, milk and money. Powdered milk: a threat to third world babies. Support for third world services. Market forces, saps and private enterprise. Status of breastfeeding in the third world. Breastfeeding as health promotion. Third World economics and breastfeeding. The global decline in breastfeeding. Professional opposition to breastfeeding. Impact on the third world. The World Health Organisation's response. Breastfeeding vs. market forces. Breastfeeding worldwide. Nestlé and its impact on the Third World. Nestlé's use of the HIV/AIDS pandemic. Other questionable practices revealed by IBFAN. The Third World face of HIV/AIDS. Capitalism: scourge of the Third World. Africa's relationship with HIV/AIDS. Some non-African Third World settings. Africa revisited. The Zimbabwe situation. Disempowerment of women with respect to HIV/AIDS. Why women are especially vulnerable. Local culture and HIV prevention. Male condoms: cultural consequences. Are female condoms the answer? Sexually transmitted disease as an acceptable risk. Impact of lack of basic education. A diluted WHO target on HIV/AIDS. What is to be done? What are the solutions? What's new? Approaches to environmental sustainabilty. Uses of biomass. How flexible is hydrogen power? Other renewable sources of energy. Ubuntu - one idea of community organisation. The people's health movement. The importance of the US contribution. Community health impact assessment. International association for impact assessment and HUIA. Political alternatives. Transnational mediation of equity. Is capitalism actually an option? The optimistic view as a solution. Pre-political greening. Can green political power survive bureaucracy?