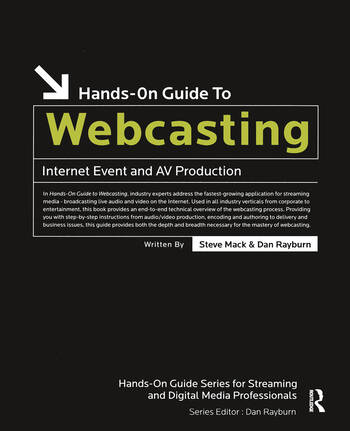 In "Hands-On Guide to Webcasting," industry experts address the fastest-growing application for streaming media - broadcasting live audio and video on the Internet. Used in all industry verticals from corporate to entertainment, this book provides an end-to-end technical overview of the webcasting process. Providing you with step-by-step instructions from audio/video production, encoding and authoring to delivery and business issues, this guide provides both the depth and breadth necessary for mastery of the subject.

Steve Mack has spent the last eight years at the forefront of the streaming media industry. He is a partner at LUX Media, a firm specializing in all areas of streaming media, including large-scale live event production, a/v production, authoring, encoding, hardware and software implementation, training, original music composition, and script writing. An accomplished author, Steve wrote The Streaming Media Bible for Hungry Minds (published Spring 2002) and wrote an article for the 1999 Wiley and Sons Encyclopedia of Electrical and Electronics Engineering entitled Broadcasting on the Internet. He has a monthly column in Streaming Magazine and regularly contributes to various web publications. Steve has produced some of the largest and most prestigious Internet broadcasts, including U2 live from Notre Dame (Yahoo Internet Magazine's "Top of the Net for 2001"), the Rolling Stones Bridges to Babylon tour, Elton Johns Oscar Party, the WOMAD festival, Bumbershoot, the Tibetan Freedom Festivals, The New York Digital Club Festivals, the MTV Europe Awards, President Clintons Inaugural address, and the first ever public live Internet broadcast of a Seattle Mariners game in 1995. Steve is a popular and sought-after public speaker, having has presented and given workshops at the National Association of Broadcasters, Internet World, the the RealConference, Streaming Media East and West, and South by Southwest. He also chaired the Internet Audio Workshop at the 105th Audio Engineering Society conference in September 1998.
Dan Rayburn has thirteen years of high profile experience launching and growing successful technology companies specifically in the streaming and digital media sector and co-founded one of the industry's first streaming media webcasting production companies. He is recognized as "the voice of the streaming media industry" and is Executive Vice President for StreamingMedia.com, a diversified news media company with a mission to serve and educate the streaming media industry. He is a sought after speaker, writer, publisher, consultant and industry entrepreneur to corporations and industry vendors and his work has been featured in print and online by nearly every major media outlet. He provides economic, financial, and business strategy consulting to law firms, corporations, and government agencies regarding litigation cases involving video over IP and digital media patents and provides independent, unbiased, industry specific data on key investment sectors in the digital media, IPTV and wireless industries to institutional money managers.

"All in all, we think the book is well done and will make a great addition to the library of those who are interested in Webcasting." - Camcorder and Computer Video "..the layout of the book is clean and well designed. Screenshots are large and clearly legible, so it's easy to follow along and get a preview of the screens you'll see when you produce the Webcast." - Camcorder and Computer Video"The series serves as a great reference resource in streaming and digital media-based subjects for industry professionals." - HiTech Review"It is very well-organized going through webcasting in the order that events occur and is divided into sections that correspond to the different components of a webcast." - HiTech Review