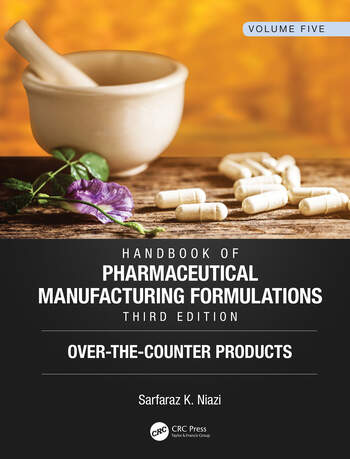 The Handbook of Pharmaceutical Manufacturing Formulations, Third Edition: Volume Five, Over-the-Counter Products is an authoritative and practical guide to the art and science of formulating drugs for commercial manufacturing. With thoroughly revised and expanded content, this fifth volume of a six-volume set, compiles data from FDA and EMA new drug applications, patents and patent applications, and other sources of generic and proprietary formulations including author’s own experience, to cover the broad spectrum of cGMP formulations and issues in using these formulations in a commercial setting. A must-have collection for pharmaceutical manufacturers, educational institutions, and regulatory authorities, this is an excellent platform for drug companies to benchmark their products and for generic companies to formulate drugs coming off patent.

Chapter 1. European Directorate for the Quality of Medicines (EDQM) Certification

Sarfaraz K. Niazi, Ph.D., a well-recognized authority on drug and dosage form development including biological drugs and alternative medicines. He is Founder and Executive Chairman of Adello Biologics, LLC, (formerly, Therapeutic Proteins International, LLC), a biosimilar products company located in Chicago, IL, Piscataway, NJ and Cashel, Ireland. As an entrepreneur, Niazi has raised hundreds of millions of dollars and became recognized as an inductee into the Chicago Entrepreneur Hall of Fame.Niazi began his career teaching pharmaceutical sciences at the University of Illinois, College of Pharmacy where he was tenured before entering the industry at Abbott International. He departed Abbott as an Abbott Volwiler Fellow to pursue his passion, first through global consulting and later through the founding a biosimilar products company.

A prolific inventor with scores of patents, most prominently in the field of bioprocessing technology, Niazi is currently the largest single holder of bioprocess technology patents. His other inventions span a broad category of technologies, new chemical entities, new formulations, new analytical methodologies, and much more. He has hands on experience in developing chemical, botanical and biological products, from discovery to regulatory approval. With over 50 ISBNs under his name, Niazi has authored many landmark books in the field of pharmaceutical sciences.

He currently serves as Adjunct Professor at the University of Illinois College of Pharmacy, Ad Hoc faculty at the University of Houston, Texas, the HEJ Research Institute, Karachi, and the National University of Science and Technology, Islamabad. He has also served as a Foreign Professor at the HEJ Research Institute, Karachi. He serves on the editorial board of the journal MOJ Proteomics & Bioinformatics (MOJPB) and starting 2017, as Chief Editor of International Journal of Biosimilars. He also serves as Member of National Advisory Board of the College of Pharmacy, University of Illinois. He is a Fellow of the Pakistan Academy of Medical Sciences, Fellow National Academy of Clinical Biochemistry and Institute of Biology. He served as a TOKTEN Fellow to India (Transfer of Knowledge Through Expatriate Nationals (UNDP). In 2013, he received the one of the highest civilian awards, Star of Distinction in Engineering, from the Pakistani President. He has hosted a radio show at Voice of America (US State Department) on a weekly basis for more than 5 years with audience into billions.