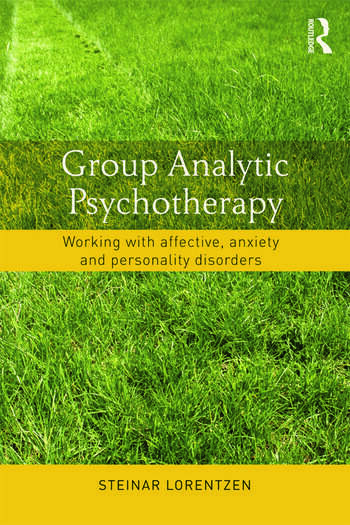 Group analytic theory is internationally recognised as an effective treatment for people suffering from mental distress, struggles with personal development and interpersonal problems. Integrating psychoanalytic and social psychological thinking and providing a group setting for self-discovery and developing social skills, long- and short-term courses in this type of therapy are increasing in popularity.

This manual provides a detailed description of both long- and short-term versions of group analytic therapy, with rich and vivid clinical examples to illustrate theory and techniques. Group Analytic Psychotherapy describes in detail what a participant may expect, differences between short- and long-term therapy and how to behave as a group member, as well as the main issues the clinician has to deal with. Topics covered include:

Providing a basis for understanding the dynamics of groups at work in offering emotional support and a positive atmosphere, Group Analytic Psychotherapy is ideal for clinicians, students and informed patients as well as all psychodynamically oriented professionals in the field. It is an essential manual for those looking to learn the main attributes of short-term intervention.

Steinar Lorentzen is a trained psychiatrist, psychoanalyst and group analyst and a founding member of the Institute of Group Analysis, Norway. He is also Professor of Psychiatry at the University of Oslo.

'This book represents a major contribution because it reflects careful science, fills a major hole in the field and begins to put the analytic group treatment modality on equal scientific footing with other evidence based group therapies. This is an essential next step given the current zeitgeist of evidence based practice in our field.'

'With disarming simplicity Lorentzen distinguishes between those techniques which apply to short-term group therapy and those which apply to long-term group therapy, the latter often loosely thought of as traditional group analysis. This is an important contribution to the group analytic literature because it bridges the gap between the demands of diagnostic classification and impersonal formulaic interventions on the one hand and the need for imaginative and intuitive thinking on the other.'

The book is well suited as a textbook for training candidates in group analysis, and for therapists who participate in group analytic research. For those who only want a short, but precise description of analytic group therapy, it is perfect. The book is published by an international publisher of well reputation, which in itself is a compliment both for the author, and for all who have contributed to the development of a group analytic milieu in Norway. It only remains to congratulate with another milestone in the work of increasing the quality of analytic group therapy.