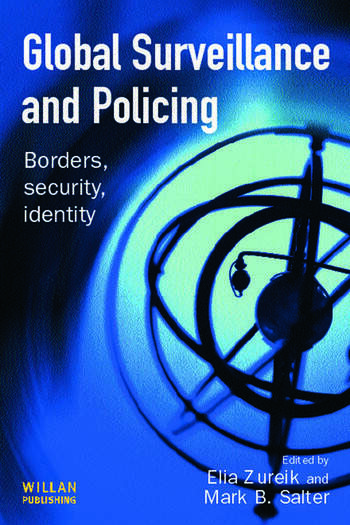 Since the 9.11 attacks in North America and the accession of the Schengen Accord in Europe there has been widespread concern with international borders, the passage of people and the flow of information across borders. States have fundamentally changed the ways in which they police and monitor this mobile population and its personal data. This book brings together leading authorities in the field who have been working on the common problem of policing and surveillance at physical and virtual borders at a time of increased perceived threat. It is concerned with both theoretical and empirical aspects of the ways in which the modern state attempts to control its borders and mobile population. It will be essential reading for students, practitioners, policy makers.

1. Global surveillance and policing: borders, security, identity - Introduction by Elia Zureik and Mark B. Salter  2. Some conceptual issues in the study of borders and surveillance by Gary T. Marx  3. At the threshold of security: a theory of international borders by Mark B. Salter  4. Borders, migration and economic integration: towards a new political economy of borders by Hélène Pellerin  5. The border is everywhere: ID cards, surveillance and the other by David Lyon  6. Borders, bodies and biometrics: towards identity management by Benjamin J. Muller  7. Expanding surveillance: connecting biometric information systems to international police cooperation by Nancy Lewis  8. What happens when you book an airline ticket? The collection and processing of passenger data post-9/11 by Colin J. Bennett  9. Potential threats and potential criminals: data collection in the national security entry-exit registration system by Jonathan Finn  10. Imperial embrace? Identification and constraints on mobility in a hegemonic empire by John Torpey  11. Fencing the line: analysis of the recent rise in security measures along disputed and undisputed boundaries by John W. Donaldson  12. 'Getting ahead of the game': border technologies and the changing space of governance by Katja Franko Aas  13. Immigration controls and citizenship in the political rhetoric of New Labour by Don Glynn 14. Freedom of movement inside 'fortress Europe' by Willem Maas

Mark B. Salter is an Associate Professor at the School of Political Studies, University of Ottowa, Canada.