Global Geostrategy
Mackinder and the Defence of the West 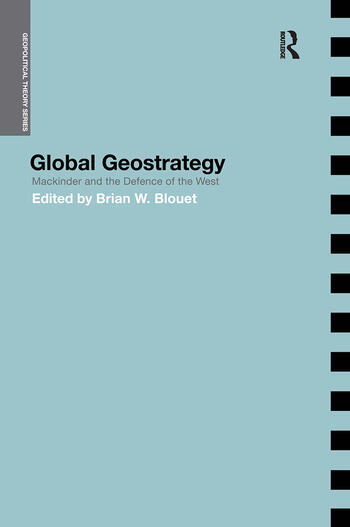 Global Geostrategy: Mackinder and the Defence of the West

This is a new examination of Halford Mackinder’s seminal global geostrategic work, from the perspective of geography, diplomatic history, political science, international relations, imperial history, and the space age.

Mackinder was a man ahead of his time. He foresaw many of the key strategic issues that came to dominate the twentieth century. Until the disintegration of the Soviet Union, western defence strategists feared that one power, or alliance, might come to dominate Eurasia. Admiral Mahan discussed this issue in The Problem of Asia (1900) but Mackinder made the most authoritative statement in "The Geographical Pivot of History" (1904). He argued that in the "closed Heart-Land of Euroasia" was a strategically placed region, with great resources, that if controlled by one force could be the basis of a World Empire. James Kurth, in Foreign Affairs, has commented that it has taken two World Wars and the Cold War to prevent Mackinder’s prophecy becoming reality.

In World War I and World War II Germany achieved huge territorial gains at the expense of the Russian empire and the Soviet Union. In the former conflict the Russian empire was defeated by Germany but the western powers insisted that the territorial gains made by Germany, at the treaty of Brest-Litovsk, be given up. In World War II Britain and the US gave material support to Stalin’s totalitarian regime to prevent Nazi Germany gaining control of the territory and resources that might have been a basis for world domination. The west, highly conscious of Mackinder’s dictum (1919) that "Who rules East Europe commands the Heartland," quickly adopted policies to contain the Soviet Union. History has therefore proved Mackinder’s work to be of vital importance to generations of strategic thinking and he remains a key influence in the new millennium.

This book will be of great interest to all students and scholars of strategic studies and military history and of geopolitics in particular.

Brian Blouet was educated in Britain and taught at the University of Sheffield before coming to the USA and teaching at the University of Nebraska, Texas A&M University, and the College of William and Mary in Virginia. He is the author of a biography of Mackinder and other books including Geopolitics and Globalization (2001).