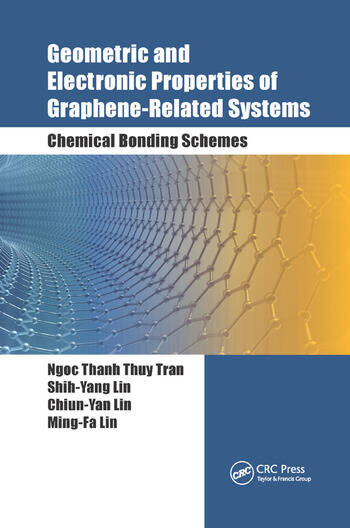 Due to its physical, chemical, and material properties, graphene has been widely studied both theoretically and experimentally since it was first synthesized in 2004. This book explores in detail the most up-to-date research in graphene-related systems, including few-layer graphene, sliding bilayer graphene, rippled graphene, carbon nanotubes, and adatom-doped graphene, among others. It focuses on the structure-, stacking-, layer-, orbital-, spin- and adatom-dependent essential properties, in which single- and multi-orbital chemical bondings can account for diverse phenomena. Geometric and Electronic Properties of Graphene-Related Systems: Chemical Bonding Schemes is excellent for graduate students and researchers, but understandable to undergraduates. The detailed theoretical framework developed in this book can be used in the future characterization of emergent materials.

Ngoc Thanh Thuy Tran obtained her PhD in physics in January 2017 from the National Cheng Kung University (NCKU), Taiwan. She works as a postdoctoral researcher at Center for Micro/Nano Science and Technology, NCKU. Her scientific interest focuses on the functionalization of graphene and its derivatives using first-principle calculations.

received his PhD in physics in 2015 from the National Cheng Kung University (NCKU), Taiwan. Since 2015, he has been a postdoctoral researcher in NCKU. His research interests include low-dimensional group IV materials and first-principle calculations.

obtained his PhD in 2014 in physics from the National Cheng Kung University (NCKU), Taiwan. Since 2014, he has been a postdoctoral researcher in the department of physics at NCKU. His main scientific interests are in the field of condensed matter physics, modeling, and simulation of nanomaterials. Most of his research is focused on the electronic and optical properties of two-dimensional nanomaterials.

is a distinguished professor in the Department of Physics, National Cheng Kung University, Taiwan. He received his PhD in physics in 1993 from the National Tsing-Hua University, Taiwan. His main scientific interests focus on essential properties of carbon-related materials and low-dimensional systems. He is a member of American Physical Society, American Chemical Society, and Physical Society of Republic of China (Taiwan).