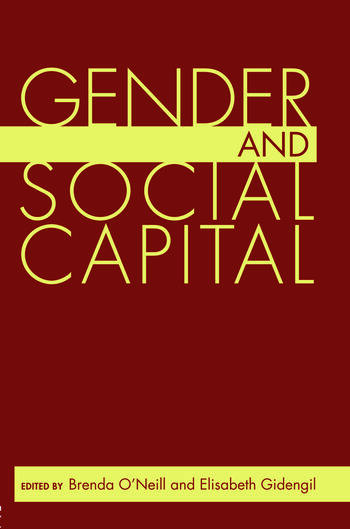 The volume brings together a stellar group of contributors who examine the social capital thesis by means of four different approaches: theoretical, historical, comparative, and empirical. In the end, this book will serve to answer two fundamental questions which have hitherto been neglected: What can a gendered analysis tell us about social capital? And what can social capital tell us about women and politics?

"The book is an excellent source of fertile ideas on social capital, gender, and politics, with contributions that include careful scrutiny of the nuances of different conceptualizations of social capital and numerous empirical investigations that demonstrate the forms and varieties of gendered politics...an overwhelmingly useful, provocative, and much-needed collection that should be of value to students and researchers alike.  I confess that at times I have been skeptical of the value of social capital as either a theoretical or an empirical tool.  This volume firmly sets these doubts to rest, presenting a more than convincing case for its utility.  The editors and contributors are to be commended for an important and original contribution to a burgeoning literature."