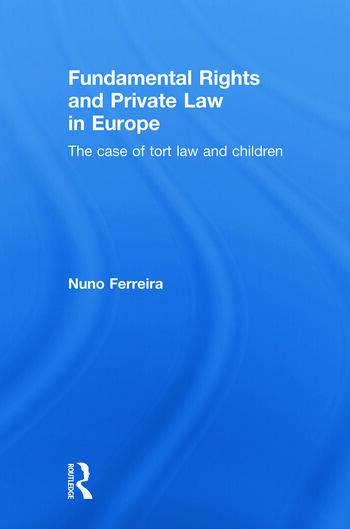 Fundamental Rights and Private Law in Europe: The case of tort law and children

The book explores, from a comparative and inter-disciplinary perspective, the relationship between fundamental rights and private law in Europe, a debate usually referred to as Drittwirkung or ‘horizontal effect of fundamental rights’. It discusses the different models of ‘horizontal effect’ and the impact that fundamental rights may have in shaping tort law, especially the position of child tortfeasors. The book concentrates on several European jurisdictions, namely France, Italy, Germany, Portugal, Sweden, Finland, and England and Wales. At a crossroad between human rights and European private law, this study draws insights from several legal fields (international, European, tort, constitutional and child law), sociology, psychology, and feminist studies. It also considers policy implications and advances proposals which would ensure the optimisation of the effect, and maximisation of the effectiveness, of fundamental rights in tort law, and more generally in private law. This book departs from traditional legal doctrines and offers a more pragmatic, comprehensive and just legal analysis of the role of fundamental rights in private law. It will be of interest to undergraduate and postgraduate students, academics, practitioners, policy-makers and activists with an interest in human rights, tort law, comparative law, children’s rights and European private law.

Nuno Ferreira is Senior Lecturer in Law at the University of Liverpool, UK.

"Drawing on a range of legal and non-legal fields, including feminist studies, psychology, and sociology, Ferreira explores the "horizontal effect" of fundamental rights in private law (also referred to as "external effect," "third-party effect," "Drittwirkung," etc.) in selected European jurisdictions (French, Italian, German, Portuguese, Swedish, Finnish, English, and Welsh). He contributes to the ongoing debate about this subject by examining the neglected area of tort law from the point of view of the tortfeasor, illustrating this general discussion with a more focused consideration on the tortuous liability of children. The topic is addressed at the international, European, and national levels and also brings in relevant aspects of other legal fields, including human rights law, constitutional law, and child law."—Book News