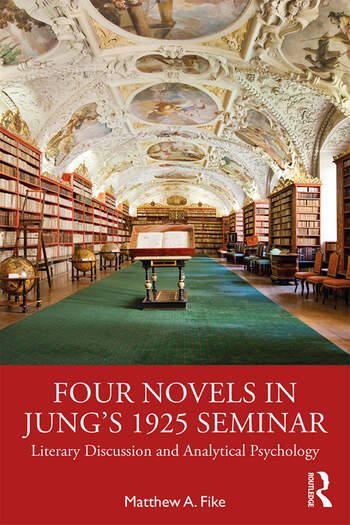 Jung originally planned to discuss several novels about the anima—Henry Rider Haggard’s She, Pierre Benoît’s L’Atlantide, and Gustav Meyrink’s The Green Face. At the request of his participants, he dropped Meyrink and included a text about the animus, Marie Hay’s The Evil Vineyard. Fike demonstrates that Haggard’s She and Benoît’s L’Atlantide portray anima possession, the visionary and psychological modes, and traditional versus Jungian approaches to history. Meyrink’s smorgasbord of Jungian theory and religion makes The Green Face a fictional counterpart to The Red Book, and both Meyrink and Hay depict states of higher consciousness that transcend the archetypes. The distinction between archetypal and spiritual possession demonstrates that The Evil Vineyard is a ghost story, and the study concludes with Hay’s dozens of allusions, which provide important metacommentary.

, the first comprehensive study of all four texts, complements seminal works by Cornelia Brunner and Barbara Hannah, critiques the seminar discussion recorded in William McGuire’s edition of Analytical Psychology: Notes of the Seminar Given in 1925 by C. G. Jung, and incorporates Jung’s own comments on the four novels in The Collected Works. Thus, it provides an essential addition to Jungian literary studies and will appeal both to students and practitioners of Jungian analytical psychology and to scholars of British, French, and German literature.

Matthew A. Fike, PhD, Professor of English at Winthrop University, teaches courses in the human experience, critical thinking, Shakespeare, and Renaissance literature. His previous studies include The One Mind: C. G. Jung and the Future of Literary Criticism and Anima and Africa: Jungian Essays on Psyche, Land, and Literature (Routledge).

"This topic has been staring every Jungian in the face since 1990 (and even before to those studying Jung in Zurich). But no one before Matthew A. Fike has even noticed it. And yet, as soon as Jungian scholars see the title of this book they will wonder why! Four Novels provides a level-headed assessment that adds considerably to our understanding of Jung’s strengths and weaknesses as a literary critic. Fascinating and important." —Terence Dawson, co-editor of The Cambridge Companion to Jung