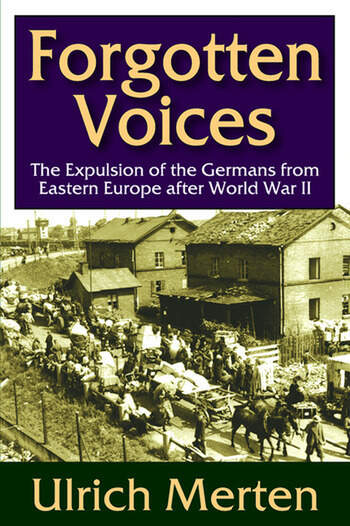 Forgotten Voices: The Expulsion of the German from Eastern Europe After World War II

The news agency Reuters reported in 2009 that a mass grave containing 1,800 bodies was found in Malbork, Poland. Polish authorities suspected that they were German civilians that were killed by advancing Soviet forces. A Polish archeologist supervising the exhumation, said, "We are dealing with a mass grave of civilians, probably of German origin. The presence of children . . . suggests they were civilians."

During World War II, the German Nazi regime committed great crimes against innocent civilian victims: Jews, Poles, Russians, Serbs, and other people of Central and Eastern Europe. At war's end, however, innocent German civilians in turn became victims of crimes against humanity. Forgotten Voices lets these victims of ethnic cleansing tell their story in their own words, so that they and what they endured are not forgotten. This volume is an important supplement to the voices of victims of totalitarianism and has been written in order to keep the historical record clear.

The root cause of this tragedy was ultimately the Nazi German regime. As a leading German historian, Hans-Ulrich Wehler has noted, "Germany should avoid creating a cult of victimization, and thus forgetting Auschwitz and the mass killing of Russians." Ulrich Merten argues that applying collective punishment to an entire people is a crime against humanity. He concludes that this should also be recognized as a European catastrophe, not only a German one, because of its magnitude and the broad violation of human rights that occurred on European soil.

Supplementary maps and pictures are available online at http://www.forgottenvoices.net

IV The Expulsion of the Ethnic German Population from Hungary

V The Flight, Incarceration, and Expulsion of Ethnic Germans from the Former Republic of Yugoslavia

VI The Fate of the Ethnic German Minority in Romania