For and Against Psychoanalysis 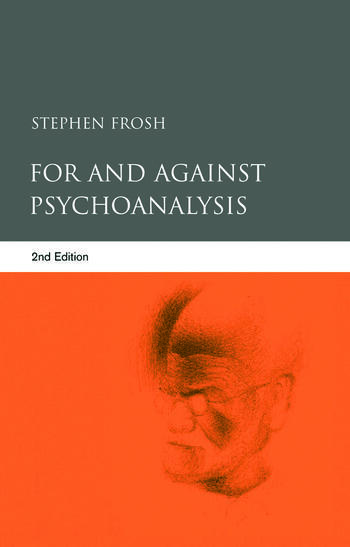 For and Against Psychoanalysis

Psychoanalysis has always been a source of controversy throughout academic and popular culture. This controversy relates to questions of its true value, its scientific status, its politics and its therapeutic effectiveness. Psychoanalysis' defenders regard it as a body of knowledge built on careful and painstaking exploration of complex clinical encounters, offering more detailed and valid insights than can be obtained from other sources. Psychoanalysis is also a building block for considerations of human subjectivity in a wide range of academic disciplines and practical areas of work, from social theory to feminist studies, to counselling and psychotherapy.

In this thoroughly revised and updated second edition of For and Against Psychoanalysis, Stephen Frosh examines the arguments surrounding psychoanalysis at some key points: its standing as a scientific theory, its value as a method of therapy, its potency as a contributor to debates around identity construction, gender, homosexuality and racism. At each of these points, there is something to be said 'for and against' psychoanalysis, with the balance depending on whether it deepens our understanding of human functioning, whether it is consistent with its own perceptions and theories or seems subservient to social pressures and norms, and whether it is coherent or muddled, evocative or sterile.

For and Against Psychoanalysis provides an accessible introduction and critical guide to the current standing of psychoanalysis. It is essential reading for students of psychoanalysis, counselling, psychotherapy and psychology, and for social researchers and social theorists, as well as for those who are simply interested in what place psychoanalysis has in the modern world.

Stephen Frosh is Pro-Vice-Master, Professor of Psychology and Director of the Centre for Psychosocial Studies at Birkbeck College, University of London. He was previously Vice Dean and Consultant Clinical Psychologist at the Tavistock Clinic.

'I very much enjoyed the first edition of For and Against Psychoanalysis. This new, updated edition is even more enjoyable. It is immensely readable because of the frankness, wit, verve, and seriousness with which Stephen Frosh details the fascinations and frustrations of the continuing ramifications of Freud's discovery of unconscious fantasy. The result is a book which is both an exciting introduction to the current philosophical, clinical, and social impact of Freudian and post-Freudian psychoanalysis, and also a very welcome and refreshing reminder to its teachers and practitioners of its problems and potential.' - Janet Sayers, Professor of Psychoanalytic Psychology, University of Kent, Canterbury

'The in-your-face title masks the most subtle, nuanced and balanced discussion of the strengths and weaknesses of psychoanalysis as treatment, theoretical perspective and social influence. Frosh admits to his biases and enthusiasms and wears his learning lightly. Hence the second edition of this much-admired book will be of continuing use to students and trainees as well as to faculty and qualified psychotherapists and counsellors.' - Andrew Samuels, Professor of Analytical Psychology, University of Essex

‘In this second edition of For And Against Psychoanalysis, Stephen Frosh has scrupulously reworked the earlier text. The second edition retains the remarkable breadth and scope of the original, while expanding and updating Frosh’s overview to include additional subject areas, such as ways in which psychoanalysis has contributed to the examination of social issues.’ – Bruce Reis, Psychologist-Psychoanalyst, Fall 2007