Flashpoints in the War on Terrorism 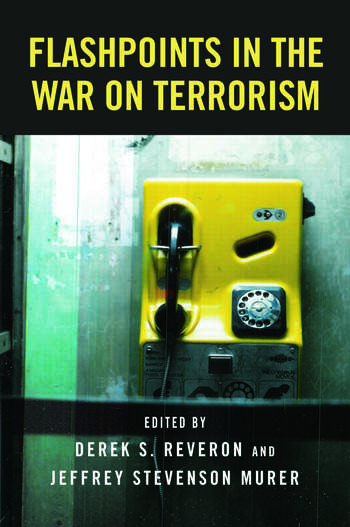 Flashpoints in the War on Terrorism

This volume offers a comprehensive overview of international political violence by bringing together foreign policy experts on several regions who examine conflicts in the Fertile Crescent, the Balkans, the Post-Soviet Region, the Himalayas, Southeast Asia, and sub-Saharan Africa. With cogent assessments of civil conflicts that threaten to be part of a ‘global jihad’, each chapter both dissects the historical roots and socio-economic causes that catalyze terrorism in those areas, as well as posits ways for the United States to meet the myriad of foreign policy challenges posed by the growing threat of contemporary international terrorism.

Jeffrey Stevenson Murer is an Assistant Professor at Swarthmore College where he teaches European Politics and Modern Political Theory. Derek S. Reveron is an Associate Professor at the Naval War College, where he specializes in democratization, strategy, and intelligence. His books include: Promoting Democracy in the Post-Soviet Region and America’s Viceroys: the Military and U.S. Foreign Policy.

"Derek Reveron and Jeffrey Stevenson Murer provide a much-needed corrective to the spate of alarmist writings on the Islamist roots of terrorism. Their essential book should be subtitled, ‘The thoughtful person’s guide to political violence in the Islamic world.’ Fourteen country and regional studies show that most terrorist threats to the U.S. and regional security come from festering local conflicts in weak Muslim states, not from global jihad. While many activists claim an Islamic identity, their struggles mainly reflect nationalist goals and economic grievances. The U.S.-led ‘war on terrorism’ risks internationalizing these conflicts by pushing political militants into the eager arms of jihadists."

"This outstanding and timely essay collection pinpoints the causes of political violence in a number of conflicts worldwide, and demonstrates the need to take a more nuanced and comprehensive approach to fighting terrorism. The authors offer insightful and practical recommendations for simultaneously combating terrorism and promoting democratic reforms."

"This volume represents a vital and comprehensive effort to understand the wide variety of local struggles that are often subsumed under the label ‘global war on terror.’ Collectively, the case studies present a formidable, empirically grounded challenge to the conventional wisdom that the United States is confronting a global Islamist movement. Anyone who wants to understand the ‘war on terrorism’ for what it is rather than for what we imagine it to be should read this book."

—Jeremy Shapiro, Research Director and Fellow, Center on the United States and Europe, The Brookings Institution

"Flashpoints in the War on Terrorism is essential reading for anyone wishing to begin a detailed examination of terrorism. . . . Reveron and Murer enlist a diverse group of scholars, each of whom is an expert in one or more facets of terrorism. Each, in turn, brings considerable depth and experience to the project, offering the reader a much greater understanding of both the depths and complexities of current terrorist hotspots. In each chapter, the contributors offer well-written, . . . compelling overviews of the nature of the conflict, followed by their identification and discussion of current flashpoints, pivot points, and hotspots. . . . [T]he greatest strength of the work [is] offering in a concise and readable format a more balanced and in-depth assessment of the multitude of factors feeding militancy. . . . Murer and Reveron's concluding essay note[s] correctly that to understand terrorism we must examine in depth the variety and nuances of the myriad causal factors of conflict, that it is important to understand the specific cultural and environmental context in which it occurs, and that it is not a unitary 'thing' that can be generalized and reduced to the least common denominator, as most government counterterrorism programs and policies seek--perhaps by design--to do."