Fire from Heaven
Studies in Syriac Theology and Liturgy 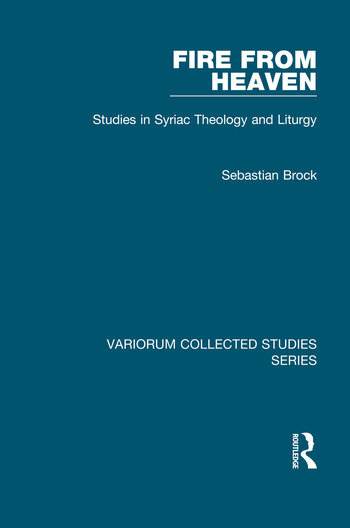 Fire from Heaven: Studies in Syriac Theology and Liturgy

This fourth collection by Sebastian Brock focuses on three areas: the christology of the Church of the East, the distinctive phraseology of the invocations to the Holy Spirit in the Syriac liturgical tradition, and two important early Commentaries on the Liturgy. The inclusion of the Church of the East into ecumenical dialogue in recent years has stimulated a renewed study of its christology, which has often been badly misunderstood. A close study of the formative texts of the fifth to seventh centuries indicates that the traditional characterisation of this Church as 'Nestorian' is not only unsatisfactory, but also thoroughly misleading. There follows a series of studies of the wording of the many invocations to the Holy Spirit to be found in Syriac liturgical texts. These bring to light a number of intriguing features, some of which can be traced back to the Jewish roots of one strand of early Syriac Christianity. Syriac also preserves one of the earliest Commentaries on the Liturgy; dating from the fifth century, it proved influential in all three Syriac liturgical traditions, and was even translated into Sogdian. This short text, and another longer work by Gabriel of Qatar (fl. c. 600), are introduced and translated in full.

Contents: The Christology of the Church of the East: The 'Nestorian' Church: a lamentable misnomer; The Persian Church up to the 6th century and its absence from the Councils in the Roman Empire; The christology of the Church of the East; Christ 'the hostage': a theme in the East Syriac liturgical tradition and its origins. Invocations to the Holy Spirit and their Background: Fire from heaven: from Abel's sacrifice to the Eucharist: a theme in Syriac Christianity; 'Come, compassionate Mother, ..., come Holy Spirit': a forgotten aspect of early Eastern Christian imagery; The epiklesis in the Antiochene baptismal ordines; Towards a typology of the Epicleses in the West Syrian Anaphoras; Invocations to/for the Holy Spirit in Syriac liturgical texts: some comparative approaches; The lost Old Syriac at Luke 1:35 and the earliest Syriac terms for the incarnation; An early interpretation of pasah: aggen in the Palestinian Targum; Passover, Annunciation and Epiclesis; From Annunciation to Pentecost: the travels of a technical term; The Ruah Elohim of Gen. 1,2 and its reception history in the Syriac tradition. Editions and Translations: Some early Syriac baptismal commentaries; An early Syriac commentary on the Liturgy; Gabriel of Qatar's commentary on the Liturgy; Index.

Sebastian Brock was Reader in Syriac Studies at the Oriental Institute, and is Professorial Fellow of Wolfson College, University of Oxford, UK.

’Besides the obvious usefulness for Syriac scholars to have articles which were previously published in different editions and periodicals how in one work, for a more general audience of scholars in Patristic and Byzantine Studies and in Church History, the entire collection serves as a perfect introduction to the ecclesiastically divided Syriac spiritual tradition that developed a distinctive outlook in its early stages independently from Greek-speaking Christianity.’ Scrinium ’Sebastian Brock’s scholarship is, as always, ground-breaking and of outstanding quality, and given that his work is frequently published in a diverse range of journals and Festschriften, some more easily found in libraries than others, the convenience of having these articles collected together in a single volume will clearly recommend it to Syriac scholars and to libraries with an interest in Syriac Christianity, Patristic theology, or liturgical studies.’ Hugoye: Journal of Syriac Studies