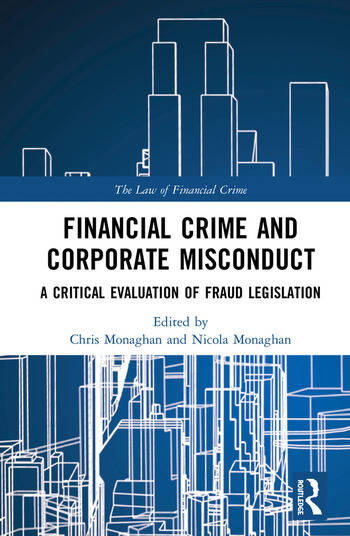 The Fraud Act 2006 presented a wholesale reform of the pre-existing deception offences under the Theft Act 1968 and Theft Act 1978. This edited collection offers a critical evaluation of fraud legislation and provides a review of the Fraud Act 2006 within the context of measures introduced within the previous decade to combat financial crime, fraud and white-collar offences.

The edited collection brings together contributors from a range of unique perspectives including academics, practitioners and a former member of the judiciary. It covers several related themes and provides the reader with a unique and original commentary on how the Fraud Act 2006 has been applied by the courts, the type of prosecutions that have taken place, the effectiveness of the Act, and other legislation which is used to prosecute financial crime and corporate misconduct. It covers procedural and evidential aspects relating to fraud trials, namely consideration of the composition of the tribunal of fact in complex fraud trials, and good character directions in fraud trials. It will be of interest to those teaching and researching in Financial Crime, Corporate Law, Criminal Law, the Law of Evidence, Criminology, Criminal Procedure and Sentencing.

Chapter 1: A critical commentary on the Fraud Act 2006 - Chris Monaghan

Chapter 2: The Fraud Act’s 10th anniversary: time to celebrate? Not quite? - Axel Palmer

Chapter 3: An empirical review of the use of the Fraud Act 2006 and other criminal offences within the school application system - Chris Monaghan

Chapter 5: Fraud in the twenty first century: is the criminal law fit for purpose? - Caroline Collins and Noel Mc Guirk

Chapter 6: The Fraud Act 2006: a decade of deception? - Maureen Johnson

Chapter 10: Do we need a failure to prevent fraud offence? - Bill Davies

Chapter 11: A judge’s perspective of the impact of the Fraud Act 2006 - HH Toby Hooper QC

Chapter 12: The fraudster at work: the interaction of the criminal justice process with the operation of an employer’s disciplinary procedures - Stephen Hurley

Chapter 13: Who should try ‘complex fraud trials’? Reconsidering the composition of the tribunal of fact 30 years after Roskill - Nicola Monaghan

Chris Monaghan is a Senior Lecturer in Law at the University of Worcester. He is the Research Lead for the School of Law and the Deputy LLB Programme Leader. His research interests include fraud and property offences, legal history and public law. Since 2009, he has published on the Fraud Act 2006 and the issue of criminalising parents who provide misleading information on school application forms. His research has been published in the Criminal Law Review and the Journal of Criminal Law.

Nicola Monaghan is a Senior Lecturer in Law at the University of Worcester. She is a member of the Honourable Society of the Middle Temple and teaches criminal law and the law of evidence. She is the author of Criminal Law Directions (Oxford University Press) and Law of Evidence (Cambridge University Press) amongst other books. Her research interests include juror misconduct and compensation for miscarriages of justice and she has published articles on these areas. The Law Commission of England and Wales and the Law Reform Commission of Ireland have cited her research on jury misconduct. She also co-founded the Blackstone's National Criminal Advocacy Competition and has taught advocacy to undergraduate students since 2002.