Exit from Democracy
Illiberal Governance in Turkey and Beyond 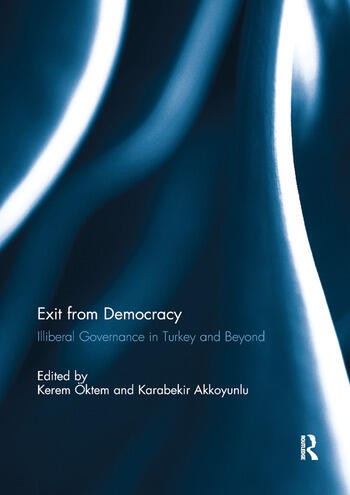 Exit from Democracy: Illiberal Governance in Turkey and Beyond

Democratic government is facing unprecedented challenges at a global scale. Yet, Turkey's descent into conflict, crisis and autocracy is exceptional. Only a few years ago, the country was praised as a successful Muslim-majority democracy and a promising example of sustainable growth. In Turkey’s Exit from Democracy, the contributors argue that President Recep Tayyip Erdoğan and the Justice and Development Party government have now effectively abandoned the realm of democratic politics by attempting regime change with the aim to install a hyper-presidentialist system. Examining how this power grab comes at the tail end of more than a decade of seemingly democratic politics, the contributors also explore the mechanisms of de-democratization through two distinctive, but interrelated angles: A set of comparative analyses explores illiberal forms of governance in Turkey, Russia, Southeast Europe and Latin America. In-depth studies analyse how Turkey's society has been reshaped in the image of a patriarchal habitus and how consent has been fabricated through religious, educational, ethnic and civil society policies. Despite this comprehensive authoritarian shift, the result is not authoritarian consolidation, but a deeply divided and contested polity. Analysing an early example of democratic decline and authoritarian politics, this volume is relevant well beyond the confines of regional studies. Turkey exemplifies the larger forces of de-democratization at play globally. Turkey’s Exit from Democracy provides the reader with generalizable insights into these transformative processes. These chapters were originally published as a special issue in Southeast European and Black Sea Studies.

Karabekir Akkoyunlu is Assistant Professor of Modern Turkey at the Centre for Southeast European Studies, University of Graz.