Edward Bibring Photographs the Psychoanalysts of His Time 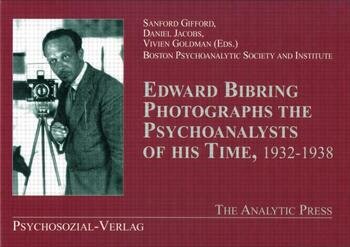 Edward Bibring Photographs the Psychoanalysts of His Time

Edward Bibring Photographs the Psychoanalysts of His Time provides us with a unique pictorial window into a fascinating period of psychoanalytic history. It is the gift of Edward Bibring, a passionate photographer who, Rolleiflex in hand, chronicled international psychoanalytic congresses from 1932 to 1938.  The period in question spans the ascendancy of Hitler, the great exodus of analysts to England and the U.S., and the Anschluss of 1938. A year after the Paris Congress, the last meeting photographed by Bibring, Europe would be in flames.

At Wiesbaden in 1932, we find an ever dignified Ernest Jones relaxing aboard a sight-seeing ship, and Helene Deutsch and Heinz Hartmann delightfully at ease at a coffee shop. At the Lucerne Congress of 1934, Anna Freud, Ludwig Jekels, Wilhelm Reich, Grete Bibring, Max Eitingon, and Franz Alexander happily converse outside a hotel.  At Marienbad in 1936, there are smiling new faces: Annie Reich, Ernst Kris, Otto Fenichel, Edward Glover, and others.  At Budapest in1937 the women – Anna Freud, Vilma Kovacs, Dorothy Burlingham, and Elisabeth Geleerd – speak animatedly among themselves.  A demure Margaret Mahler and a chic Marianne Kris make their appearance. In 1938, we see a series of table shots, where analysts, now with suit jackets removed and even a few collars loosened, relax with their food, wine, and cigars.

Bracketed by Sanford Gifford’s brief introduction and biographical sketches of all the captured parties, Bibring’s photographs, digitized and enlarged, retain just enough graininess to evoke a different era in the history of psychoanalysis. It is heartening to see the paragons of “classical psychoanalysis” as warmly human, their analytic reserve supplanted by relaxed affability.  But it is sobering to remember that the high spirit engendered by Congresses – in Bibring’s time no less than our own – may overlay the gravest political developments and the deepest personal anxieties.

Sanford Gifford, M.D., is a psychoanalyst, historian, and Director of the Archives of the Hanns Sachs Library at the Boston Psychoanalytic Society and Institute.

Daniel Jacobs, M.D., is Director of the Hanns Sachs Library at the Boston Psychoanalytic Society and Institute.

Vivien Goldman, M.L.S., M.A., is the former librarian of the Hanns Sachs Library at the Boston Psychoanalytic Society and Institute.

"We owe a debt of gratitude, do we not, to those who ventured out into dangerous waters and were willing then to share their observations and ideas in an open, forthright manner in the hope of providing improved tools with which their colleagues, as well as future generations of analytic practitioners, might better offer help to suffering humanity. It is refreshing, therefore, to find that one group among our number, the Boston Psychoanalytic Society and Institute, has begun to comb its archives for material that would lend itself to the possibility of creating a series of publications that will add in a lively way to the historical record of the field of psychoanalysis as a living, growing, evolving body of scientific vitality. These are people whose names were of course familiar to me from the halcyon days of the emerging new discipline that I entered, with pleasure and excitement – whose works I had read, a few of whom I had met, and with whom, in one instance, I had once had the pleasure of discussing a case over the telephone. It was a delight to see photographs of them in which they appeared as bright-eyed, relaxed, friendly, smiling individuals greeting one another, embracing, chatting over lunch, strolling along the waterfront, and otherwise coming to life to me as ordinary human beings within the pages of this charming little volume. I am grateful to the Boston Psychoanalytic Society and Institute and to the editors of this collection of Bibring’s photographs for sharing them with us. It was a pleasure to have been afforded the opportunity to make the visual acquaintance of so many people whom I have long admired and long appreciated. I look forward to the next entity that emerges from the BPSI Archives."

“Images such as those in this collection remind us that our forebears are not pale spirits of some former time or ghostly purveyors of analytic theory and technique, but flesh and blood characters, with faces and bodies, with ways of engaging one another and, as is obvious from some of the photographs, ways of enjoying themselves.”

- Daniel Jacobs, M.D., from the Preface