Educating for Peace in a Time of Permanent War
Are Schools Part of the Solution or the Problem? 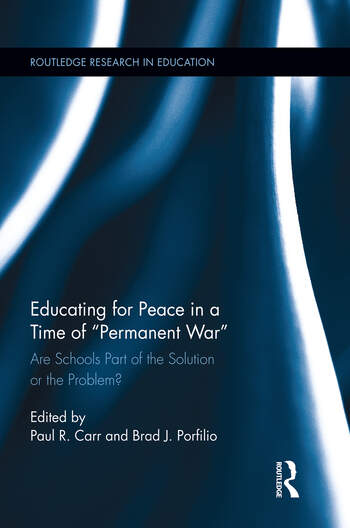 Educating for Peace in a Time of Permanent War: Are Schools Part of the Solution or the Problem?

What is the meaning of peace, why should we study it, and how should we achieve it? Although there are an increasing number of manuscripts, curricula and initiatives that grapple with some strand of peace education, there is, nonetheless, a dearth of critical, cross-disciplinary, international projects/books that examine peace education in conjunction with war and conflict. Within this volume, the authors contend that war/military conflict/violence are not a nebulous, far-away, mysterious venture; rather, they argue that we are all, collectively, involved in perpetrating and perpetuating militarization/conflict/violence inside and outside of our own social circles. Therefore, education about and against war can be as liberating as it is necessary. If war equates killing, can our schools avoid engaging in the examination of what war is all about? If education is not about peace, then is it about war? Can a society have education that willfully avoids considering peace as its central objective? Can a democracy exist if pivotal notions of war and peace are not understood, practiced, advocated and ensconced in public debate? These questions, according to Carr and Porfilio and the contributors they have assembled, merit a critical and extensive reflection. This book seeks to provide a range of epistemological, policy, pedagogical, curriculum and institutional analyses aimed at facilitating meaningful engagement toward a more robust and critical examination of the role that schools play (and can play) in framing war, militarization and armed conflict and, significantly, the connection to peace.

Preface: In Search of Peace in a Culture of War  Antonia Darder.  Acknowledgments.  1. Introduction: Framing Peace and War Within the Educational Project: Willful (Dis)Engagement and Meaning (and Cost) of Conflict  Paul R. Carr and Brad J. Porfilio  Section I: Theorizing Peace, War and Peace  2. Militaristic Privilege in Schools and Beyond: Challenges for Peace Educators  Laura L. Finley  3. Saying "No!": The Power of Transformative Learning  Ilhan Kucukaydin and Patricia Cranton  4. "Why Do Students Call Me ‘The War Teacher?" Problematizing Militarism in Education as a Freireian Codification  Mike Klein  5. Re-Examining the Role of Intellectuals in Times of War Through the Lens of Edward Said’s Work: A Call for Action to Social Justice Educators  Pierre W. Orelus  Section II: Scanning the War in Our Daily (and Educational) Lives  6. A Pedagogy of Ceaseless War: JROTC and the Military Occupation of US Schools  Shannon K. McManimon, Brian D. Lozenski and Zachary A. Casey  7. The Way of the Soldier – Jarheads and Hurt Lockers: Perpetual War, Identity and Critical Media Literacy  William M. Reynolds  Section III: The Curriculum of War and Peace  8. Moving from a Curriculum of Compliance to a Curriculum of Possibility: Militarization of Schools, State Curricular Standards, and Creating Democratic Spaces for Teaching Military Conflict  Christopher Leahey  9. The Military-Industrial-University Complex and Social Science: A Brief history and Current Update of a Professional Contribution to War  Randle W. Nelsen  10. Art and Culturally Relevant Pedagogy vs. Warring Words in a Race to the Frontline  Mary F. Wright, Brenda M. Wright and Matthew P. McMillan  Section IV: Internationalizing Peace and the Trauma of War and Conflict  11. Who Owns Education for Peace and for War? Peace/War Industry and Ethnic Stratification: The Case of One Underprivileged School in Israel  Dalya Yafa Markovich  12. Open the Doors, Paint the Walls and Ignore the Bells: Refashioning the Post-Movimiento Classroom to Foment "Civic Space" Ties  Stephen T. Sadlier and Ignacio Rogelio Morales Sánchez  13. Swimming Against the Current: Educating for Peace in the University Classroom in Turkey  Antonia Mandry  Section V: Resisting the Militarization of Education  14. Building a Movement: Counter-Recruitment Organizing in US Public Schools  Seth Kershner and Scott Harding  15. Creating Peaceful and Nonviolent Schools in the Midst of a Culture of War and Violence  Tom Cavanagh  16. War and the Sectarian Mind: Education and the Development of Consciousness in the Age of "Permanent War"  John M. Elmore.  Afterword: Reflecting on Critical Perspectives of Peace Education  Zvi Bekerman

Paul R. Carr is Associate Professor in the Departments of Sociology and Interdisciplinary Studies at Lakehead University, Orillia, Canada.

"The doomsday clock moves closer to midnight in a world that has gone mad with violence and perpetual war. The power of the military to manufacture and sanitize death, devastation and destruction has never been interrogated before by critical educators. Educating for Peace in a Time of Permanent War: Are Schools Part of the Solution or the Problem? is the first volume of its kind in which the militarization of education (both in curriculum and in the larger pedagogical order) is examined. This is an extremely important book that should be read by all educators."

"In Educating for Peace in a Time of Permanent War" Are Schools Part of the Solution or the Problem?, editors Paul R. Carr and Brad J. Porfilio skillfully weave together and present the intellectual capital (the theory, philosophy and empirical work) of a set of international scholars par excellence. In five engaging sections – 'Theorizing Peace, War and Peace'; 'Scanning the War in Our Daily (and Educational) Lives'; 'The Curriculum of War and Peace'; 'Internationalizing Peace and the Trauma of War and Conflict'; and, 'Resisting the Militarization of Education' – and contextualized between the inspiring bookends of a Foreword by Antonia Darder and an Afterword by Zvi Bekerman, the authors explore virtually every aspect of the role of education in the drive for war and its perpetuation, and its equally liberatory potential in perusing its antithesis, peace. Any activist, student or academic working in the areas of peace, education, sociology, social justice or anti-imperialism – or anyone excited about the current world-wide push-back against the forces of oppression (neo-liberalism, authoritarianism, sexism, racism and homophobia) – would be remiss not to carefully read and consider the important thoughts and analyses proffered in this strikingly important volume!"

"In our shadowed time of military solutions to chronic problems, schools themselves mirror these means toward an end. The authors in this volume critically assess the role of schooling as a tool of governments and nation-building through analysis of the military mind and militarism in our teaching and learning. They find in the efficiency and surveillance of a modern nation-state a cast of mind and a portfolio of practices that seep inexorably down to authoritarian accountability measures in many schools today. I was particularly struck to realize that common means of peace education may be too weak or incomplete to counter the military mind and its accepted solutions to conflict, especially when the war machine becomes a major means to economic prosperity. The part of this volume devoted to classroom practices by critical peace educators around the world gave me some hope that teaching and learning in and out of schools may someday become generative, rather than reactive, incubators for a new life. This new life would be a way of being in the world that is not simply an altered cast of mind or an amended outlook. It would be a culture of peace-building that would begin to counter the suspicion of our relationships with one another, the violence of modes of being with non-human animals, and the exploitation of our planet."

"The significance of this book is that, by contrasting with education for war, it offers optimism about the potential of education for peace by presenting concrete examples of alternatives, which indicate possible changes in perceptions of and attitudes towards war...The book conveys one coherent voice in problematizing the role of education in militarization and in proposing ways of demilitarizing and shifting education towards a path to peace."