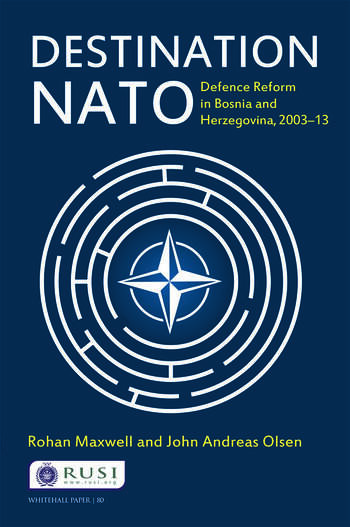 Defence reform has been a major component of Bosnia’s stabilisation and nation-building. Though true for many cases of post-conflict transition, it is especially so for Bosnia, which arguably has the most complex state structure in Europe. Ten years on from the start of Bosnia’s defence-reform process, Destination NATO records and reviews the Bosnian experience of defence reform. The monograph offers policy-makers, practitioners and academics knowledge of the specific case of Bosnia and Herzegovina, and makes these insights relevant to defence-reform efforts in other contexts.

The research is based on original sources and an extensive set of interviews and talks with key individuals including ambassadors, ministers and civil servants, and other senior national and international actors, in addition to discussions with several hundred politicians at local levels, students and NGO representatives. The authors also use their first-hand knowledge and insights to complement the documentation, interviews and discussions.

Rohan Maxwell is the senior political-military advisor at NATO Headquarters, Sarajevo (NHQSa). Maxwell served with the Canadian Army as a combat engineer from 1982 to 2005 and he is a graduate of the Canadian Army Command and Staff College. He earned a BSc in Physics and Computer Science, and an MA in War Studies from the Royal Military College of Canada.

In 2003 he was assigned to BiH, initially to the staff of the Military Advisor to the High Representative and subsequently to the Defence Reform Section of the OSCE Mission to BiH. In this capacity he participated in the implementation of the initial BiH defence reform agreement of 2003 (two entity armies under one state-level roof) including, inter alia, developing detailed structures for the new state-level defence organisations. In 2005 he was re-assigned to the newly-established NHQSa to lead the staff responsible for political-military aspects of defence and security sector reform in BiH, and provided conceptual, analytical and policy support leading to the final defence reform agreement of 2005 (a single, integrated military force in BiH).

He retired from the military in 2005 in order to continue in his current capacity with NHQSa, supporting BiH efforts in defence reform and NATO integration.

is an active serving colonel currently assigned to the Norwegian Ministry of Defence and a visiting professor of operational art and tactics at the Swedish National Defence College.

He was the deputy commander and chief of the NATO Advisory Team at NHQSa from 2009 to 2012, a period that witnessed activation of both a comprehensive public engagement program and gender awareness initiative, as well as finalisation of the documentation for all prospective defence property to be transferred to the state of BiH. Previous assignments include tours as dean of the Norwegian Defence University College and head of its division for strategic studies.

Colonel Olsen is a graduate of the German Command and Staff College and has served as liaison officer to the German Operational Command. He has a doctorate in history and international relations from De Montfort University, a master’s degree in contemporary literature from the University of Warwick, and a master’s degree in English from the University of Trondheim. Professor Olsen is the author of Strategic Air Power in Desert Storm and John Warden and the Renaissance of American Air Power, editor of On New Wars, A History of Air Warfare, Global Air Power and Air Commanders, and co-editor of The Evolution of Operational Art and The Practice of Strategy.

‘In this excellent study, Maxwell and Olsen chart the rocky path of defence reform in Bosnia-Herzegovina (BiH) since 2003. By placing defence reform in its proper historical and political context they have avoided the obvious pitfall (all too common in writings on Security Sector Reform) of treating the process as purely a technocratic exercise. As a result, they arrive at a carefully argued, balanced and cautiously optimistic set of conclusions; conclusions that are plainly of relevance well beyond the particular case of BiH.’--Professor Mats Berdal, King’s College London

‘I recommend this excellent and most comprehensive report to anyone with an interest for Defence Reform, in particular to those interested in Bosnia Herzegovina and its prospects for the future. It is difficult to think of more difficult circumstances in which to reform a state’s defence than those of Bosnia. The lessons drawn by the authors are applicable generally and the value of NATO’s PfP Program is well demonstrated.’--General Sir Rupert Smith KCB DSO OBE QGM