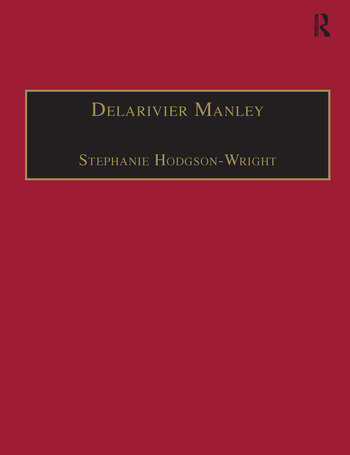 The works included in this volume constitute Delarivier Manley's early oeuvre, written in the seventeenth century. They comprise one epistolary novella, Letters Written [sic] by Mrs Manley; one commendatory poem 'To the Author of Agnes de Castro'; one comedy, The Lost Lover, or The Jealous Husband, one tragedy, The Royal Mischief; and two commemorative poems, 'Melpomeme: The Tragick Muse' and 'Thalia: The Comick Muse'. In the light of new readings of Delarivier Manley's early work, this volume demonstrates her important contribution to the literary and theatrical milieu of the late seventeenth century.

Contents: Preface by the General Editors; Introductory Note; Letters Written [sic] by Mrs Manley. To which is Added a Letter from a supposed Nun in Portugal, to a Gentleman in France, in Imitation of the Nun's Five Letters in Print, by Colonel Pack; 'To the Author of Agnes de Castro' [in Agnes de Castro]; The Lost Lover; or, The Jealous Husband: A Comedy; The Royal Mischief. A Tragedy; 'Melpomene: The Tragick Muse' and 'Thalia: The Comick Muse' [in The Nine Muses, or, Poems written by Nine several Ladies Upon the Death of the late Famous John Dryden, Esq.(1700)]

Stephanie Hodgson-Wright is an Independent Scholar.