Curiosity and Wonder from the Renaissance to the Enlightenment 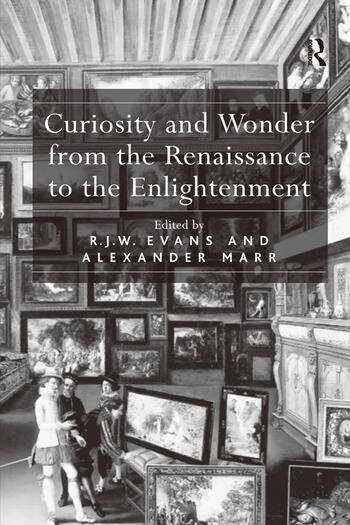 Curiosity and Wonder from the Renaissance to the Enlightenment

'Curiosity' and 'wonder' are topics of increasing interest and importance to Renaissance and Enlightenment historians. Conspicuous in a host of disciplines from history of science and technology to history of art, literature, and society, both have assumed a prominent place in studies of the Early Modern period. This volume brings together an international group of scholars to investigate the various manifestations of, and relationships between, 'curiosity' and 'wonder' from the 16th to the 18th centuries. Focused case studies on texts, objects and individuals explore the multifaceted natures of these themes, highlighting the intense fascination and continuing scrutiny to which each has been subjected over three centuries. From instances of curiosity in New World exploration to the natural wonders of 18th-century Italy, Curiosity and Wonder from the Renaissance to the Enlightenment locates its subjects in a broad geographical and disciplinary terrain. Taken together, the essays presented here construct a detailed picture of two complex themes, demonstrating the extent to which both have been transformed and reconstituted, often with dramatic results.

Contents: Preface; Introduction, Alexander Marr; ’Out of the frying pan...’: curiosity, danger, and the poetics of witness in the Renaissance traveller's tale, Wes Williams; The metaphorical collecting of curiosities in early modern France and Germany, Neil Kenny; The New World collections of Duke Cosimo I de' Medici and their role in the creation of a Kunst- and Wunderkammer in the Palazzo Vecchio, Adriana Turpin; The jocund cabinet and the melancholy museum in 17th-century English literature, Claire Preston; Curious knowledge and wonder-working wisdom in the Occult Works of Heinrich Khunrath, Peter Forshaw; Enthusiasm and ’damnable curiosity’: Meric Casaubon and John Dee, Stephen Clucas; Gentille curiosité: wonder-working and the culture of automata in the late Renaissance, Alexander Marr; Nosce teipsum: curiosity, the humoural body, and the culture of therapeutics in late 16th- and early 17th-century England, Deborah Harkness; Back from wonderland: Jean Antoine Nollet’s Italian tour (1749), Paola Bertucci; Curiosity and the lusus naturae: the case of ’Proteus’ Hill, George Rousseau; Epilogue, George Rousseau; Index.

R.J.W. Evans is Regius Professor of History at Oxford University, UK. Alexander Marr is Lecturer in Art History at the University of St Andrews, UK.

'The book opens with Alexander Marr's beautifully lucid essay on the state of the research in this area ... It is in the work of Deborah Harkness and George Rousseau that the most fascinating new trend emerges. Each of these writers constructs an analysis of how curiosity and wonder can throw light on the construction of the self. ... This shift of emphasis from objects to subjects suggested by this book may have profound implications for the study of collections, notably moving the study of curiosity and wonder out of the Kunstkammer and into the archives.' Journal of the History of Collections ’The scholarship in the essays is up-to-date and suggests the immensely broad range of semantic neighborhoods and subjects that terms like curiosity and wonder encompassed.’ Renaissance Quarterly ’A particular strength of the volume is the diverse authorship... Another strength of the book is the wide range of sources that the authors employ.’ Metascience ’...the more circuitous and surprising routes to modernity along which these essays direct us make for a very interesting and illuminating journey.’ European History Quarterly ’... the editors and contributors have produced a beautifully illustrated and well-researched book that both shows how much has been accomplished by scholars and how much work remains to be done.’ Technology and Culture