Cretomania
Modern Desires for the Minoan Past 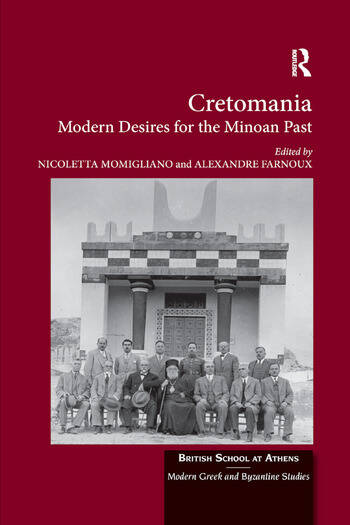 Cretomania: Modern Desires for the Minoan Past

Since its rediscovery in the early 20th century, through spectacular finds such as those by Sir Arthur Evans at Knossos, Minoan Crete has captured the imagination not only of archaeologists but also of a wider public. This is shown, among other things, by its appearance and uses in a variety of modern cultural practices: from the innovative dances of Sergei Diaghilev and Ted Shawn, to public and vernacular architecture, psychoanalysis, literature, sculpture, fashion designs, and even neo-pagan movements, to mention a few examples.

is the first volume entirely devoted to such modern responses to (and uses of) the Minoan past. Although not an exhaustive and systematic study of the reception of Minoan Crete, it offers a wide range of intriguing examples and represents an original contribution to a thus far underexplored aspect of Minoan studies: the remarkable effects of Minoan Crete beyond the narrow boundaries of recondite archaeological research.

The volume is organised in three main sections: the first deals with the conscious, unconscious, and coincidental allusions to Minoan Crete in modern architecture, and also discusses archaeological reconstructions; the second presents examples from the visual and performing arts (as well as other cultural practices) illustrating how Minoan Crete has been enlisted to explore and challenge questions of Orientalism, religion, sexuality, and gender relations; the third focuses on literature, and shows how the distant Minoan past has been used to interrogate critically more recent Greek history.

Preface and acknowledgements, Farnoux and Momigliano / Introduction, Momigliano / Part 1 Cretomania and The Built Environment - Conscious, Unconscious, and Coincidental Allusions in Modern Architecture and Reconstructions: Orthochronicity and its (dis)contents: Cretomania and Frank Lloyd Wright, Preziosi / Identity and freedom: some observations on Minoan and contemporary Greek architecture, Philippides and Sgouros / The artistic reception of Minoan Crete in the period of Art Déco. The reconstruction of the palace at Knossos … and why Arthur Evans was right, Blakolmer / Part 2 Cretomania in the Visual and Performing Arts, and Other Cultural Practices: The Minoan woman as the Oriental woman: Mariano Fortuny’s Knossos scarves and Ruth St. Denis, Caloi / From Russia with love: Minoan Crete and the Russian Silver Age, Momigliano / Lord of the Dance: Ted Shawn’s Gnossienne and its Minoan context, Morris / The ocean-liner Aramis: a voyage to the land of Minos and Art Deco, Boucher / Cretomania and Neo-paganism: the Great Mother Goddess and gay male identity in the Minoan Brotherhood, Burns / Part 3 Cretomania in Literature - Dialogues with Rhea Galanaki: Minoans and the postmodern critique of national history: two novels by Rhea Galanaki, Beaton / Rhea Galanaki’s The Century of the Labyrinths: a dialogue between literature and archaeology that starts with Minos Kalokairinos, Kopaka / Growing up next door to Knossos and ‘The Other Ariadne’, Galanaki / Afterword; Afterthoughts, Fotiadis.

Nicoletta Momigliano is Reader in Aegean Prehistory at the University of Bristol, specialising in Minoan archaeology. She has directed archaeological projects in Crete and Turkey, and is the author of many articles and books, including Archaeology and European Modernity: Producing and Consuming the Minoans (2006, co-edited with Yannis Hamilakis) and Duncan Mackenzie: a Cautious Canny Highlander and the Palace of Minos at Knossos (1999).

is Professor of Archaeology and History of Art at the University of Paris IV (Sorbonne) and, since 2011, has been Director of the French School in Athens. He is an expert on the archaeology of Crete, where he has directed excavations at Malia and Dreros. His numerous publications include Cnossos, l’archéologie d’un rêve (1993) and Homère, le prince des poètes (2010).