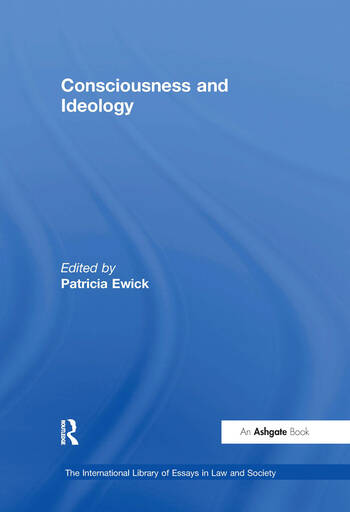 Contents: Series preface; Introduction; Part I Consciousness and Ideology in Socio-Legal Studies: The ideology of law: advances and problems in recent applications of the concept of ideology to the analysis of law, Alan Hunt. Part II Conceptual Practices of Ideology and Consciousness: Everyday metaphors of power, Timothy Mitchell; The ideological effects of actuarial practices, Jonathan Simon; Suspended in space: Bedouins under the law of Israel, Ronen Shamir. Part III Discursive Practices of Ideology and Consciousness: The dialogics of legal meaning: spectacular trials, The unwritten law, and narratives of criminal responsibility, Martha Merrill Umphrey; Kissing hands and knees: hegemony and hierarchy in Shari'a discourse, Brinkley Messink; Legal discourse and political intolerance: the ideology of clear and present danger, Mark Kessler; Practice and paradox: deconstructing neutrality in mediation, Sara Cobb and Janet Rifkin; The discourses of mediation and the power of naming, Sally Engel Merry. Part IV Legal Consciousness, Resistance and the Everyday: Situating legal consciousness: experiences and attitudes of ordinary citizens about law and street harassment, Laura Beth Nielsen; Remote justice: tuning in to small claims, race, and the reinvigoration of civic judgement, Valerie Karno;...The law is all over': power resistance and the legal consciousness of the welfare poor, Austin Sarat; Narratives of the death sentence: toward a theory of legal narrativity, Benjamin Fleury-Steiner; Narrating social structure: stories of resistance to legal authority, Patricia Ewick and Susan Silbey; Blue jeans, rape, and the 'de-constitutive' power of law, Kitty Calavita; Name Index.