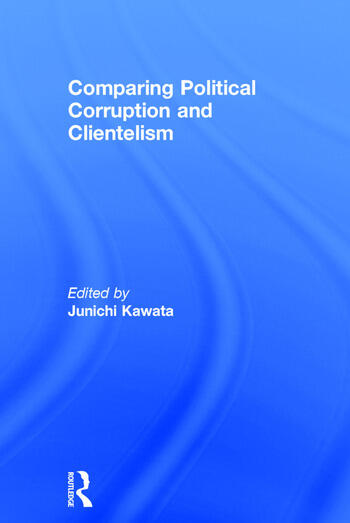 Past modernization literature has assumed that corruption and clientelism reflect a pre-modern social structure and could be referred to as a pathologic phenomenon of the political system. Very few have considered corruption and clientelism as structural products of an interwoven connection between capital accumulation, bureaucratic rationalization, interest intermediation and political participation from below. This volume analyzes key aspects of the debate such as: should corruption and clientelism be evaluated as a 'lubricant' in terms of administrative efficiency - legitimate demands from the margins of society to redress social and economic inequality or to readdress economic development? What would be the effect of strengthening policing to control political corruption? Could electoral reform or a decentralization of government power be a cure for all? These questions among others are answered in this comprehensive volume.

Junichi Kawata is Professor of Political Science in the Graduate School of Law and Politics at Osaka University, Osaka, Japan.

’...a first-rate analysis. The theoretical essays break new ground. The chapters on France and South Korea as well as the classic cases of Italy and Japan present incisive and fine-grained studies. A superb collection.’ Alan S. Zuckerman, Brown University, USA 'Ten top-flight scholars develop a long-overdue analysis of the links and contrasts between ideas - corruption and clientelism - that have too often been treated as synonyms or, in the case of clientelism, ignored. The result is a set of diverse perspectives, some conceptual and others based on illuminating case studies, that will be essential to anyone seeking to understand how corruption and clientelism function in real societies, and how values, social relationships, and political interactions influence both corruption and reform.' Michael Johnston, Colgate University, USA 'Anyone interested in the evolving patterns of clientelism and corruption, and of their interconnections, should read this book. The volume proposes both consolidated and innovative approaches to the study of these phenomena which, collectively, bring the reader up to date with the best scholarly production in this field.' Simona Piattoni, University of Trento, Italy '...there is much of interest in this collection, including case studies on Europe, richly confirming the editor's working hypotheses that clientelism-corruption is no pre-modern throwback but part and parcel of political life...A fascinating approach to political science understandings of corruption-clientelism, a rare example of East Asia-European crossover political research, hopefully this collection will lend to emulation bringing in other case studies and examples.' Journal of Contemporary Asia Publishers