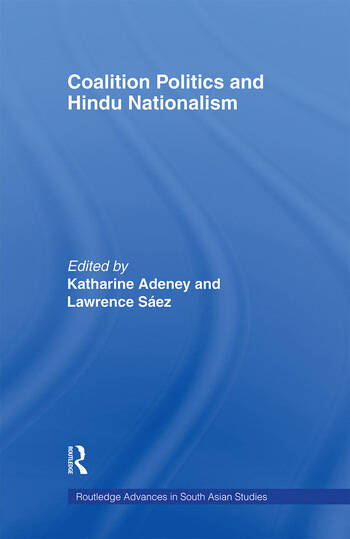 This new collection examines the emergence of the Bharatiya Janata Party (BJP) in India and the ways in which its Hindu nationalist agenda has been affected by the constraints of being a dominant member of a coalition government.

Religious influence in contemporary politics offers a fertile ground for political-sociological analysis, especially in societies where religion is a very important source of collective identity. In South Asian societies religion can, and often has, provided legitimacy to both governments and those who oppose them. This book examines the emergence of the BJP and the ways in which its Hindu nationalist agenda has been affected by the constraints of being a dominant member of a coalition government. The collected authors take stock of the party's first full term in power, presiding over the diverse forces of the governing NDA coalition, and the 2004 elections. They assess the BJP's performance in relation to its stated goals, and more specifically how it has fared in a range of policy fields - centre-state relations, foreign policy, defence policies, the 'second generation' of economic reforms, initiatives to curb corruption and the fate of minorities.

Explicitly linking the volume to literature on coalition politics, this book will be of great importance to students and researchers in the fields of South Asian studies and politics.