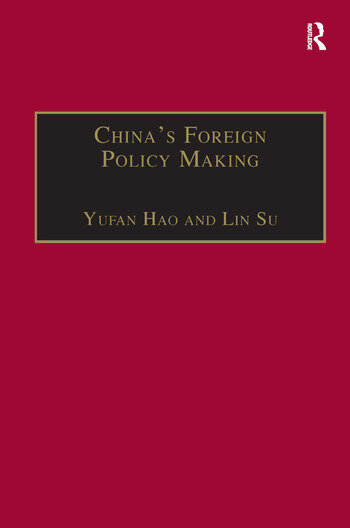 Various domestic factors impact upon China's foreign policy making, such as bureaucracy, academics, media and public opinion. This stimulating book examines their increasing influence and focuses in particular on China's policy towards the United States, exploring whether there has been an emergence of societal factors, independent of the Communist Party, that have begun to exert influence over the policy process. It also debates questions such as how it will affect the ability of the Chinese government to frame and implement its policy towards the US, and whether it has generated institutional arrangements in China for cooperation on issues such as trade, human rights and Taiwan. The book provides a better understanding of the role of societal forces in China's foreign policy making process.

'This volume is a major step forward in the outside world's understanding of how Chinese society affects the substance of Chinese foreign policy and the process by which it is made. The contributors collectively present a sophisticated look at how the media, individuals, localities, nationalism, and globalization all shape the evolving policies governing the relationship between China and the rest of the world.' David M. Lampton, Johns Hopkins University, USA 'This timely study explores and exposes a range of domestic influences on China's foreign policy making...the contributions to this volume show the diverse range of mediums and mechanisms by which institutions, individuals, and localities have input into the process. Consideration is given to think tanks, the internet, civil society, nationalism, the media, provinces, and other domestic sources. A must-read for serious students and analysts of China's foreign relations and foreign policy making system.' David Shambaugh, George Washington University, USA '...this book constitutes important and interesting reading for China scholars, as well as for students of foreign policy more generally. It paints a broad and dynamic picture of Chinese society through the lens of China's internationalization in eceonomy, information and ideas. It also provides insider views of Chinese foreign policy making.' The China Journal '...this work provides the reader with an excellent picture of today's China and the different factors influencing its foreign policy making. The expert analyses are well documented and will be of interest to a broad academic and journalistic audience.' Etudes Internationales 'For two decades, China's foreign policy making has been a subject of enormous interest to international scholars...China's Foreign Policy Making is a continuation of this enterprise and it will be of interest for people working on Chinese affairs.' Journal of Chinese Political Science