Captivity, Forced Labour and Forced Migration in Europe during the First World War 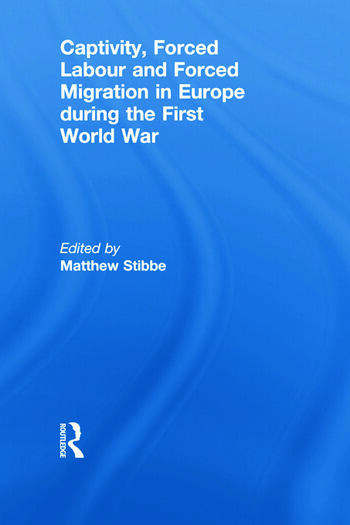 Captivity, Forced Labour and Forced Migration in Europe during the First World War

The notion of the First World War as 'the great seminal catastrophe' (Urkatastrophe) of the twentieth century is now firmly established in historiography. Yet astonishingly little has been written about the fate of non-combatants in occupied and non-occupied territory, including civilian internees, deportees, expellees and disarmed military prisoners.

This volume brings together experts from across Europe to consider the phenomena of captivity, forced labour and forced migration during and immediately after the years 1914 to 1918. Each contribution offers a European-wide perspective, thus moving beyond interpretations based on narrow national frameworks or on one of the fighting fronts alone. Particular emphasis is placed on the way in which the experience of internees, forced labourers and expellees was mediated by specific situational factors and by the development of ‘war cultures’ and ‘mentalities’ at different stages in the respective war efforts. Other themes considered include the recruitment and deployment of colonial troops in Europe, and efforts to investigate, monitor and prosecute alleged war crimes in relation to the mistreatment of civilians and POWs. The final contribution will then consider the problems associated with repatriation and the reintegration of returning prisoners after the war.

This book was published as a special issue of Immigrants and Minorities.

"Taken together, these essays provide insight into how class, gender, ethnicity, and nationality shaped the experiences of the First World War’s victims and combatants. Despite the geographical and thematic ground covered, Stibbe has managed to assemble a collection of complementary essays that shed new light on subjects that have received far too little attention [...] There remains much research to be done on the 1914–18 conflict, and Captivity, Forced Labour and Forced Migration in the First World War serves as an example of the sort of innovative comparative work one expects to see in the coming years. As such, it deserves a wide readership among both students and advanced scholars." Brian K. Feltman, University of Koln, Germany