Calculation and Coordination
Essays on Socialism and Transitional Political Economy 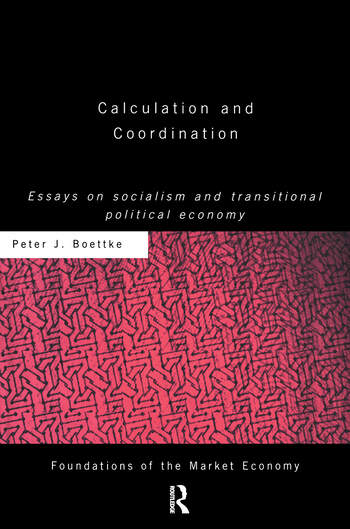 Calculation and Coordination: Essays on Socialism and Transitional Political Economy

This collection of essays from one of the major Austrian economists working in the world today brings together in one place some of his key writings on a variety of economic issues.

1: Why no Austrian Socialists?; 1A Appendix: Is economics a moral science?; Part I - The Theoretical Framework; 2: Economic calculation: The Austrian contribution to political economy; 3: Hayek's The Road to Serfdom revisited: Government failure in the argument against socialism; 4: Coase, communism and inside the 'Black Box' of soviet-type economies; Part II - History and practice of real existing socialism; 5: The soviet experience with pure communism; 5A Appendix: The Soviet experience with pure communism: Rejoinder to Nove; 6: The political economy of Utopia: Communism in Soviet Russia, 1918-1921; 7: Soviet venality: A rent-seeking model of the communist system; Part III - Realism and Reform; 8: Credibility, commitment and soviet economic reform; 9: Perestroika and public choice: The economics of autocratic succession in a rent-seeking society; 10: The reform trap in economics and politics in the former communist economies; 11: Promises made and promises broken in the Russian transition; 12: The Russian crisis: Perils and prospects for Post-soviet transition; 13: The political infrastructure of economic development; 13A Appendix: The argument applied to Post-Perestroika Russia; Part IV - Political economy and the fate of economies; 14: Why culture matters: economics, politics and the imprint of history; 15: Concluding remarks; 15A Appendix A: Economic freedom and economic growth; 15B Appendix B: Economic growth and human well-being

Peter J. Boettke is Associate Professor at George Mason University, where he also serves as the Deputy Director of the James M. Buchanan Center for Political Economy.