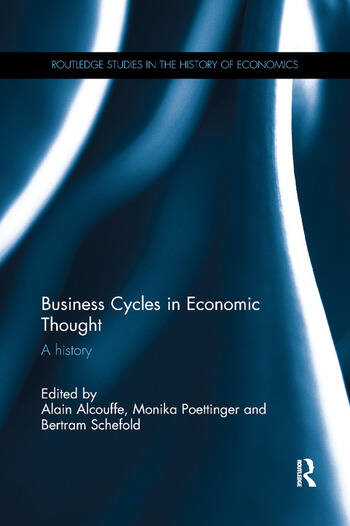 Business Cycles in Economic Thought underlines how, over the time span of two centuries, economic thought interacted with cycles in a continuous renewal of theories and rethinking of policies, whilst economic actions embedded themselves into past economic thought.

This book argues that studying crises and periods of growth in different European countries will help to understand how different national, political and cultural traditions influenced the complex interaction of economic cycles and economic theorizing. The editors of this great volume bring together expert contributors consisting of economists, historians of economic thought and historians of economics, to analyse crises and theories of the nineteenth and the twentieth century. This is alongside a comprehensive outlook on the most relevant advances of economic theory in France, Germany and Italy, as well as coverage of non-European countries, such as the United States. Several of the highly prestigious Villa Vigoni Trilateral Conferences formed the background for the discussions in this book.

This volume is of great interest to students and academics who study history of economic thought, political economy and macroeconomics.

Mistaking a phase of endogenous growth with a new role for the State for a "Great Depression". The recent financial crisis compared to that of 1873-1979 Maurice Baslé

Keynes, Wages and Employment in Light of the Great Depression Harald Hagemann

Kaldor and Robinson on the business cycle: a closed chapter of postkeynesian economics? Bertram Schefold

Social spending: its role in economic recovery processes and beyond. Arguments from the 19th to mid-20th Centuries Sandrine Michel

French Planning: How to cope with Business Cycles? Alain Alcouffe

From Ideas’ Cycle to Economic Cycle: the refoundation of liberalism (1929 to 1985) Arnaud Diemer

Alain Alcouffe is Professor Emeritus at Toulouse University, France, and has published many articles and book chapters on industrial and regional economics, economics of knowledge, economics of education and history of economic thought.

teaches economic history and history of economic thought at Bocconi University, Milan, Italy. She has published many articles and book chapters on the industrialization process in Italy, merchant networks and German entrepreneurial migrations.

is Senior Professor at Fachbereich Wirtschaftswissenschaften Goethe-Universität, Germany. He has published more than 40 books and 250 articles on economic theory, history of economic thought, energy policy and general economic policy. He edited the series Klassiker der Nationalökonomie.