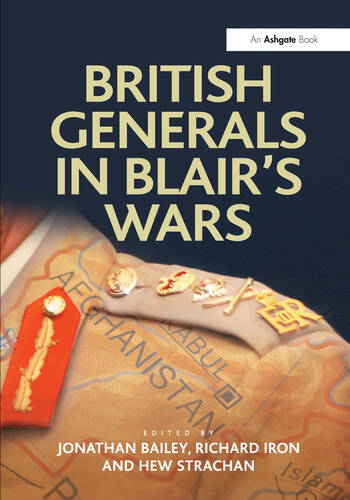 British Generals in Blair's Wars is based on a series of high profile seminars held in Oxford in which senior British officers, predominantly from the army, reflect on their experience of campaigning. The chapters embrace all the UK's major operations since the end of the Cold War, but they focus particularly on Iraq and Afghanistan. As personal testimonies, they capture the immediacy of the authors' thoughts at the time, and show how the ideas of a generation of senior British officers developed in a period of rapid change, against a background of intense political controversy and some popular unease. The armed forces were struggling to revise their Cold War concepts and doctrines, and to find the best ways to meet the demands placed upon them by their political leaders in what was seen to be a 'New World Order'. It was a time when relations between the Government of the day and the armed services came under close scrutiny, and when the affection of the British public for its forces seemed to grow with the difficulty of their operational tasks. This is a truly unique and invaluable book. For the first time, we are offered first-hand testimony about Britain's involvement in recent campaigns by senior participants. In addition to touching on themes like civilian-military relations, the operational direction of war and relationships with allies, these eyewitness accounts give a real sense of how the character of a war changes even as it is being fought. It will be essential reading for those in military academies and staff colleges, not only in Britain but throughout NATO, and especially in the USA. It also has profound policy implications, as both the UK and NATO more generally reassess their strategies and the value of intervention operations. It will also become a primary source for historians and students of the wars, in Iraq and Afghanistan in particular.

Jonathan Bailey's last appointment in the British Army before he retired in 2005 was Director General Development and Doctrine. He served in Northern Ireland, commanded Assembly Place ROMEO in Rhodesia in 1979-80; was Operations Officer 4th Field Regiment RA during the Falklands War; and in 1999 was KFOR's Chief Liaison Officer to the Yugoslav General Staff and to the Kosovo Liberation Army. He has written several books and articles on defence and strategic themes. Since 2005 he has worked in the defence industry, and led the seminar series on Campaigning and Generalship, at the University of Oxford. Richard Iron left the British Army in 2012 and is a visiting fellow at the University of Oxford. He has served in the Sultan of Oman's Armed Forces and several tours in Northern Ireland. He commanded 1st Battalion the King's Own Royal Border Regiment in the Balkans. He was subsequently responsible for British and NATO land doctrine. He was a prosecution expert witness in the Sierra Leone War Crimes trials and from 2007 to 2008 was chief mentor to the Iraqi commander in Basra, including Operation Charge of the Knights. Sir Hew Strachan is Chichele Professor of the History of War, Fellow of All Souls College, Oxford and was Director of the Oxford Programme on the Changing Character of War from its inception in 2004 until 2012. He is the author of several highly acclaimed books on military history, including European Armies and the Conduct of War (1983), The Politics of the British Army (1997), and The First World War: Volume 1: To Arms (2001). He is a member of the Commonwealth War Graves Commission and the World War I Centenary Advisory Board. He has also written extensively on strategy, and is a member of the Chief of Defence Staff's Strategic Advisory Panel.

'Generals may talk, but rarely write self-critically: this collection of essays is a remarkable exception. Jonathan Bailey - himself an exceptional soldier-scholar - along with Hew Strachan and Richard Iron have assembled an extraordinary array of senior officers (and one or two civilians) who reflect on Britain's last decade of war. The resulting essays are often excoriating - of politicians, but also of the military institutions from which these soldiers have sprung. A British audience will find the generals' self-examination sobering, even disturbing; Americans will take away insights into our most important ally; students of military affairs more generally will wish to ponder carefully these reflections on generalship in the twenty-first century.' Eliot A. Cohen, Johns Hopkins School of Advanced International Studies, USA 'This excellent book contains a revealing collection of papers, written by senior officers and officials charged with the command and direction of British forces in the last decade. They record the efforts and decisions made within circumstances of: controversial and ambivalent political direction, uncertain popular support, scarce resource, unsatisfied planning assumptions and unrealisable expectations; complicated by the nature of coalition operations. This book is recommended to all who wish to understand the atrophy of Britain's strategic faculties.' General Sir Rupert Smith KCB DSO OBE QGM 'This collection must be almost unique in military history. Seldom if ever have senior military commanders discussed so frankly the difficulties they have faced in translating the strategic demands made by their political masters into operational realities. The problems posed by their enemies were minor compared with those presented by corrupt local auxiliaries, remote bureaucratic masters, and civilian colleagues pursuing their own agendas. Our political leaders should study it very carefully before they ever make such demands on our armed forces agai