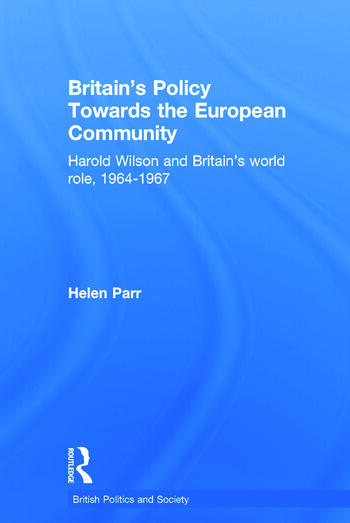 Harold Wilson’s apparent volte-face on European Community membership in the autumn of 1966 has long puzzled commentators and Wilson’s colleagues alike. Based on interviews, private papers and recently released evidence from the National Archives, this book provides a fresh interpretation of Wilson’s policy towards the European Community.

Studying the development of Britain’s policy between 1964 when Harold Wilson took office, and 1967 when the French President General de Gaulle vetoed Britain’s membership application for a second time, this book examines the rationale behind the British approach, explaining why Wilson launched an initiative for membership when the French seemed certain to obstruct. Also discussing Wilson’s handling of the Cabinet, and shedding light on Britain’s diplomacy towards the Six, this work places British policy towards Europe within the context of its foreign policy transition from a global to a regional role.

Examining an important event in Anglo-European relations, this is essential reading for students of post-war British history, and for those interested in Britain’s historical relationship with Europe.

Introduction  1. Harold Wilson, Britain’s World Role and the European Community, October 1964-January 1965  2. Bridge-Building and the Empty Chair: British Policy towards the European Community, February 1965-February 1966  3. The Politics of Decision, March – October 1966  4. Free-Wheeling with the General: The Formation and Conduct of the Probe of the Six, November 1966 – March 1967  5. Finding a Role? Cabinet’s Acceptance of the European Application, March – April 1967  6. The Long Haul to Membership? May – December 1967.  Conclusions.  Bibliography

Helen Parr is a Lecturer in the School of Politics, Philosophy, International Relations and the Environment at Keele University. She is also an editor of The Labour Governments 1964-1970 Reconsidered (Routledge 2005).