Artificial Intelligence and the Environmental Crisis
Can Technology Really Save the World? 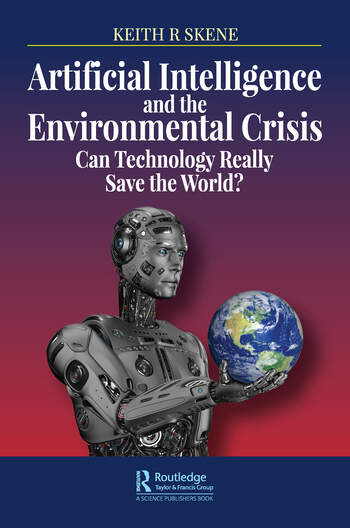 Artificial Intelligence and the Environmental Crisis: Can Technology Really Save the World?

A radical and challenging book which argues that artificial intelligence needs a completely different set of foundations, based on ecological intelligence rather than human intelligence, if it is to deliver on the promise of a better world. This can usher in the greatest transformation in human history, an age of re-integration. Our very existence is dependent upon our context within the Earth System, and so, surely, artificial intelligence must also be grounded within this context, embracing emergence, interconnectedness and real-time feedback. We discover many positive outcomes across the societal, economic and environmental arenas and discuss how this transformation can be delivered.

Artificial Intelligence and the Internet of Things

Nothing new under the Sun

Oh, for a nice cold soda: the birth of the internet of things

The two-month, ten-man project to transform the world

Getting to grips with the jargon: symbolic and non-symbolic AI

Should I Stay or Should I Go? Ethics in AI

The strange case of Asimov’s laws

Free will and moral judgement

The confused Owl of Minerva: dangers of a moral vacuum

Who’s in charge of the big bad wolf?

What should a declaration of AI rights look like?

Fear and loathing in AI

So what is human intelligence?

Philosophy and intelligence: the framing of our thoughts

Other Modes of Intelligence: Thinking Outside the Human Box

Animal intelligence: Machiavellian sentience and the wisdom of the swarm

Ecosystem intelligence: systems thinking in the cathedral of thought

A brief history of our path towards destruction

The five clear road signs that point towards criticality

Why ecological damage matters to us

Adam Smith and his invisible hand

Kuznets and his curve: how ninety five percent speculation led us badly astray

Forget the Romans. What has AI ever done for us?

AI and the environment

Technology and sustainability: bellicose bedfellows or Romeo and Juliet?

The swallow whose nest was stolen: a salutary tale

Blinded by the bling: dashboard dogs and a disappearing sea

What needs changed and what change do we need?

The chains that bind: taking responsibility for our footprints

The Ogiek people and the new, improved invisible hand

Lessons from the edge of the world: The St Kildan legacy

The Garden of Eden complex: how not to fix the world

The central role of AI in feedback: shaping our new world

How AI can help overcome these barriers

The nature of transition

Why societal change is key

How to manage societal change

Requiem for the King of Phrygia

Born in the historic city of Armagh in Ireland in 1965, Keith is a former Association of Rhodes Scholars of Australia Scholar, carrying out field research across the planet, from Kenya to the Carpathian mountains, from the Scottish Highlands to southwest Australia and from Vietnam to Trinidad. In 2010, Keith established the Biosphere Research Institute (www.biosri.org), becoming its first director. The Biosphere Research Institute does cutting-edge research on environmental, economic and societal sustainability, focusing on a fundamental dialogue around our place in the Earth system.

"To call this text wide-ranging would be a significant understatement, and Skene has set himself an enormous task. Across 10 discrete sections, he seeks to define and illustrate not only the nature of human, and non-human, intelligence – but also the diverse nature of ethical debate, the nature of economics and sustainability, the myriad threats that human exploitation poses to the biosphere, how these could be addressed and the dramatic structural changes to society that would be necessary.
Moving beyond humanity to the (perhaps vexed) question of intelligence as a broader concept, Skene explores the concepts of swarm intelligence and the wisdom of crowds, culminating in an exposition of how 'ecosystem intelligence' might be employed as a tool in developing sustainable global solutions to environmental management – through the agency of artificial intelligence (AI) systems. This book is a passionate manifesto, a call to arms, by someone who clearly cares deeply about his subject."
— John Gilbey, Department of Computer Science, Aberystwyth University, An Excerpt from Times Higher Education