Anthropocene Psychology
Being Human in a More-than-Human World 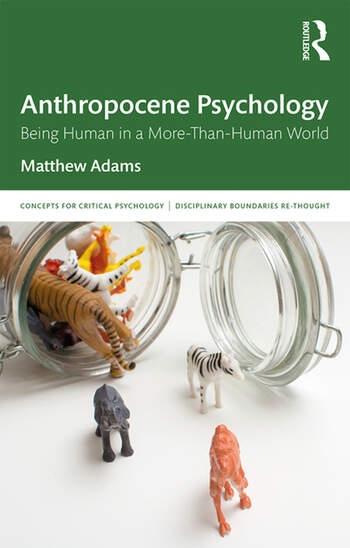 Anthropocene Psychology: Being Human in a More-than-Human World

This ground-breaking book critically extends the psychological project, seeking to investigate the relations between human and more-than-human worlds against the backdrop of the Anthropocene by emphasising the significance of encounter, interaction and relationships.

Interdisciplinary environmental theorist Matthew Adams draws inspiration from a wealth of ideas emerging in human–animal studies, anthrozoology, multi-species ethnography and posthumanism, offering a framing of collective anthropogenic ecological crises to provocatively argue that the Anthropocene is also an invitation – to become conscious of the ways in which human and nonhuman are inextricably connected. Through a series of strange encounters between human and nonhuman worlds, Adams argues for the importance of cultivating attentiveness to the specific and situated ways in which the fates of multiple species are bound together in the Anthropocene. Throughout the book this argument is put into practice, incorporating everything from Pavlov’s dogs, broiler chickens, urban trees, grazing sheep and beached whales, to argue that the Anthropocene can be good to think with, conducive to a seeing ourselves and our place in the world with a renewed sense of connection, responsibility and love.

Matthew Adams is based in the School of Applied Social Science at the University of Brighton, UK. His previous books include Ecological Crisis, Sustainability & the Psychosocial Subject (2016) and Self & Social Change (2007).