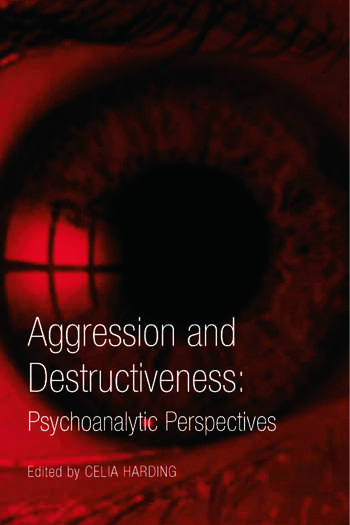 Why, when and how does aggression go wrong?

How can we make sense of apparently meaningless destructiveness and violence

Aggression is a part of human nature that energises our relationships, acts as an impetus for psychic development, and enables us to master our world. More often, we focus on its more destructive aspects, such as the violence individuals inflict on themselves or others and overlook the positive functions of aggression.

This book makes a valuable contribution to the attempt to make sense of human aggression, destructiveness and violence perpetrated against the self, others and reality. It will be of great interest to trainee and qualified psychodynamic counsellors, psychoanalytic psychotherapists and psychoanalysts.

Part I: Mapping the Terrain. Harding, Making Sense of Aggression, Destructiveness and Violence.  Royston, Destructiveness: Revenge, Dysfunction or Constitutional Envy? Part II: Developmental and Theoretical Perspectives. Parsons, From Biting Teeth to Biting Wit: The Normative Development of Aggression. Renn, Attachment, Trauma and Violence: Understanding Destructiveness from an Attachment Theory Perspective. Harrison, 'In Pieces': The Effects of the Memory of a Violent Father on a Son's Development. Ruszczynski, The Problem of Certain Psychic Realities: Aggression and Violence as Perverse Solutions. Part III: Destructiveness in Disguise and as Disguise. Mann, Misanthropy and the Broken Mirror of Narcissism: Hatred in the Narcissistic Personality. Harding, The Victim's Revenge: He is 'Crime' and I am 'Punishment' (Rigoletto). Woods, Bullying, Education and the Role of Psychotherapy. Christie, On a Hiding into Nothing? Work with Women Affected by Violence. Kleimberg, Some Reflections on the Connections Between Aggression and Depression. Lucas, Destructive Attacks on Reality and the Self. Amos, 'Poison his Delight': Destructiveness and the Ending of Treatment. Thomas, Absence and Absent-mindedness.