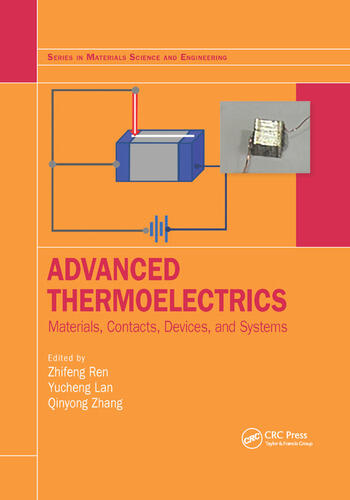 This book provides an overview on nanostructured thermoelectric materials and devices, covering fundamental concepts, synthesis techniques, device contacts and stability, and potential applications, especially in waste heat recovery and solar energy conversion. The contents focus on thermoelectric devices made from nanomaterials with high thermoelectric efficiency for use in large scale to generate megawatts electricity.

Prof. Zhifeng Ren is M. D. Anderson Professor in the Department of Physics and the Texas Center for Superconductivity at the University of Houston.

Prof. Qinyong Zhang is a professor in the Center for Advanced Materials and Energy at Xihua University of China.

Prof. Yucheng Lan, an associate professor in Morgan State University and was a research assistant professor in the Department of Physics and the Texas Center for superconductivity at the University of Houston, has worked on microstructures of thermoelectric nanomaterials and devices. He is an author of 90 peer-reviewed papers publ