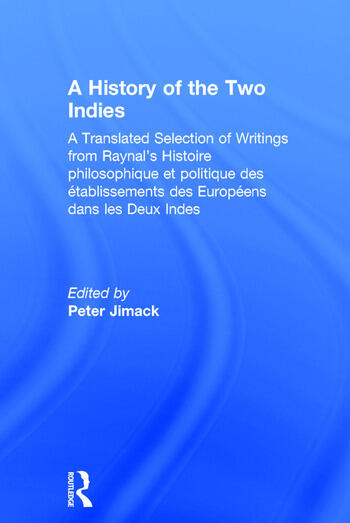 First published in 1770 and running to over one million words, Raynal’s Histoire philosophique et politique des établissements des Européens dans les Deux Indes was an immediate bestseller that was to go through numerous editions in various languages. Taking a radical anti-imperialistic stance, the nineteen books that comprised the original work covered the history of European colonisation of India, the East Indies, China, parts of Africa, and the Americas. Much of the success, and subsequent reputation, of the Histoire was based on its attacks on tyranny, slavery and colonial exploitation, and it quickly became one of the basic texts for the humanitarian movement. In this current edition, Peter Jimack has chosen a representative selection of passages from all books of the Histoire that shows the breadth and scope of the work. His translation into English of these from the standard enlarged 1780 edition captures all the vitality and passion of Raynal and his co-authors (including Diderot) and highlights just why this book had such a profound and enduring impact. A helpful and detailed Introduction sets the work in its historical and philosophical context. As well as making available one of the key radical works of the later eighteenth century, this edition reveals much about the impact of foreign countries and cultures on Enlightenment thinking. Dealing with the activities of all the main European colonial powers, France, Spain, Britain, The Netherlands and Portugal, it reveals much about their trading and imperial ventures across the East Indies and Americas, and the effect this was to have on both sides of the Atlantic. As such this edition will prove invaluable for all students and scholars interested in eighteenth-century colonialism, political theory, the history of foreign trade, slavery or Enlightenment philosophy.

Contents: Introduction; Discoveries, wars and conquests of the Portuguese in the East Indies; Settlements, wars, policies and commerce of the Dutch in the East Indies; Settlements, trade and conquests of the English in the East Indies; Voyages, settlements, wars and commerce of the French in the East Indies; Commerce of Denmark, Ostend, Sweden, Prussia, Spain and Russia in the East Indies. Important questions concerning links between Europe and the Indies; The discovery of America. The conquest of Mexico. Spanish settlements in this part of the New World; The Spanish conquest of Peru. Changes in this empire since it acquired new rulers; The Spanish conquest of Chile and Paraguay. Events accompanying and following the invasion. Principles on which Spain organizes its colonies; The Portuguese settle in Brazil. Wars they waged there. Products and wealth of this colony; The European nations become established in the great American archipelago; The Europeans go into Africa to buy men to cultivate the plantations of the West Indies. Conduct of this trade. What is produced by the labour of the slaves; Settlements of the Spanish, the Dutch and the Danes in the American islands; French settlements in the American islands; British settlements in the American islands; French settlements in North America. On what was their hope of prosperity based? What was the result of these projects?; A new order is established in the French colonies of North America. What is the result of these new projects?; The British colonies in the territories of Hudson Bay, Canada, ÃŽle Saint-Jean, Newfoundland, Nova Scotia, New England, New York and New Jersey; The British colonies founded in Pennsylvania, Maryland, Virginia, Carolina, Georgia and Florida. General reflections on all these settlements; Conclusion; Bibliography; Index.

'Jimack ... presents an engaging perspective on modernization in this abridged translation of Raynal's Histoire philosophique et politique des établissements des Européens dans les Deux Indes....thoroughly absorbing. Highly recommended. All libraries...' Choice 'With this useful volume we can now teach a much more balanced version of the most influential Enlightenment commentary on seaborne European imperialism.' International Journal of Maritime History ’...this volume of extracts (translated by the editor) will be immensely valuable to readers across a wide range of disciplines.’ Forum for Modern Languages ’Jimack's introduction is superbly achieved by establishing the political significance and historical context of the Histoire in its day while also summarising the current historiographical debates that surround the work... In addition to identifying the passages written by Raynal's collaborators, Jimack's footnotes provide ample factual information regarding exchange rates, historical personages, and clarifications of events described in the text, especially when it is factually inaccurate or misleading. A short by useful bibliography is also included... this book is highly recommended for undergraduate and graduate courses on colonialism, the Enlightenment, and European intellectual history.’ Itinerario